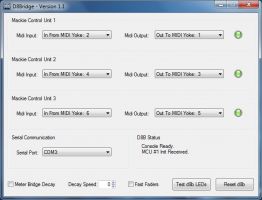 The Mackie Control hardware units have 9 faders total, 8 channels plus one master fader. To be able to use all of the D8B's 25 faders, they are emulating 3 complete units. It's like having 3 MCUs in one big box.

Changes and Updates in version 1.1: