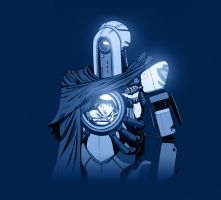 Originally conceived as an AI-augmented prototype exosuit for military operations in humanoid-hostile environments, Voder was hailed by the Galactic government as the weapon that would finally end the war. Unfortunately, development was rushed, the vocal apparatus was rudimentary (requiring a humanoid manual operator), and the AI was unchecked and erratic. Consequently, Voder developed its own agenda, turning against the government that created it and "employing" any persons it found convenient to as operators in its service, like cogs in the metaphorical machine.