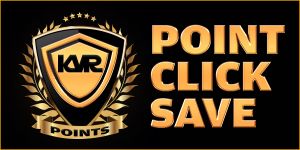 KVR is delighted to announce KVR Points, our new rewards program. We really appreciate your enthusiasm and can think of no better way to reward your loyalty than by giving away... free points.

Next we want to thank those of you who have subscribed to the KVRDeals Newsletter. Thank you for letting us keep you informed.

Last but not least, we want to thank ALL KVR members and new members. Free points for everyone.

Thank you for your ongoing support for the growing universe of audio technologies and, more specifically, for KVR itself.