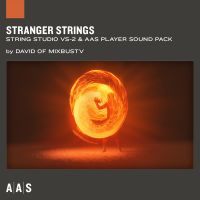 Applied Acoustics Systems has released the Stranger Strings sound pack for the String Studio VS-2 and AAS Player plug-ins in collaboration with Italian sound designer David of MixbusTV on YouTube. AAS say David does not only host of one of the most highly regarded and trusted YouTube channel in the music production industry but is also a platinum mix and mastering engineer with a past as a professional musician, songwriter, and arranger. Now, with this sound pack, he shares his creativity and ideas for modern productions.

Stranger Strings showcases an eclectic collection of 104 "mix-ready" presets that touches rock, pop, industrial, movie soundtracks, hip hop, trap as well as EDM. Made with performance in mind, these sounds morph and change based on your playing and sensibility—they go far beyond their description.

The Stranger Strings sound pack is available now as an instant download delivery package. Stranger Strings works with both the String Studio VS-2 plug-in (sold separately) and the included AAS Player plug-in.

To mark the release, everything String Studio VS-2 is 50% off until August 31, 2018. The discounts are as follows: