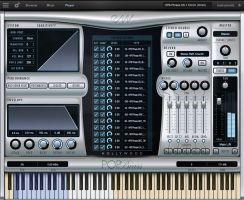 EastWest/Quantum Leap has announced the upcoming release of Hollywood Pop Brass, delivering the sound of a tight, bombastic, and dynamic brass section that will make tracks pop and sizzle.

Hollywood Pop Brass features a 4 or 5 piece ensemble that includes 2 trumpets, trombone, tenor, alto, and baritone saxes. It includes multi-sampled ensemble sections recorded in the famous Studio 1 at EastWest Studios. It also includes dozens of stylized phrases in multiple keys recorded in Studio 2, a favorite of many Latin artists going all the way back to Tijuana Brass by Sergio Mendes and Brasil 66. These phrases cover many genres from pure pop to rock, funk, soul, and many distinctive rhythms and melodies from the Latin world.

EastWest say "Hollywood Pop Brass was created for one simple reason: There's just nothing else out there on the market that instantaneously gives you that fiery, punchy pop brass sound that made songs like "Uptown Funk" such mega hits. This library offers something for everyone: whether you want to build deep and detailed orchestrations with one of the world's top horn sections, or if you just want to "plug and play" using licks and phrases that will inspire you and bring that "It" factor to your song."

NAMM attendees will have the opportunity to play and listen to Hollywood Pop Brass at the EastWest booth 17301. All other recent releases such as Voices Of Opera, featuring the vocals of soprano Larisa Martinez (Andrea Bocelli) and tenor Carlton Moe (Phantom of the Opera), Voices Of Soul, Spaces II, Voices Of The Empire, and Hollywood Choirs will be available at interactive kiosks throughout the booth, as well as ComposerCloud, the subscription service for musicians with access to over 40,000 EastWest virtual instruments (starting at $19.99/month).

Hollywood Pop Brass will be available this spring for purchase and as a free addition for all subscribers of ComposerCloud.