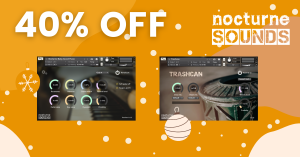 Nocturne Sounds has announced its 2021 winter sale, with a 40% discount off both its Baby Grand Piano and Trashcan Junk Percussion Kontakt libraries until 4 January 2022.

Both sample libraries are produced in 96kHz 24-bit, with CPU-efficient scripting and an intuitive user interface. They require the full version of Kontakt 5.8.1 or above.

Based in the UK, Nocturne Sounds is a small British sample library developer known for creating unique and characterful sample libraries. They also work closely with composers and producers to produce bespoke virtual instruments for one-of-a-kind custom sounds.