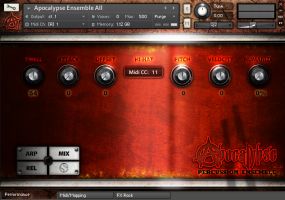 Soundiron has announced the release of Apocalypse Percussion Ensemble v2.0 for Kontakt. This major upgrade completely overhauls APE to make it more playable and versatile than ever before as well as adding almost 10 GB of additional content, including brand new articulations and remixed and remastered old ones.

Apocalypse Percussion Ensemble is a massive collection of aggressive scoring and concert percussion that features over 40 different drums and nearly 200 articulations and now weighs in at nearly 25 GB and over 25,000 individual samples. A few drums which APE features are: ensemble and solo bass drums, ensemble and solo toms of varying sizes, an 8-member snare ensemble, 6 different solo snares, clicks, clacks, hi-hats, stick and mallet rides, splashes, crashes, gongs and more. 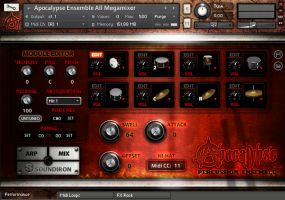 Each instrument features three independent microphone positions which can be easily mixed and enabled/disabled completely using the pop-up mixer panel. In the main Master presets, each microphone position can also be routed to different Kontakt outputs for external effects processing and complete mixing freedom. The new version of APE features a range of different presets to give users a variety of options depending on their workflow. "Standard" presets allow access to the full library in a classic percussion array layout while "Mixers" sub-group the articulation for even more sound-shaping control. The Tuned Dual-Layer presets are great for sound design as they provide users with the articulations in tuned, configurable layers. Finally, the improved Megamixer system is now a full-featured kit-builder that allows any articulation to be loaded into one of 8-slots, each with fully independent controls, saving on both RAM and CPU while providing flexibility. All presets feature a wide variety of control via a new custom user interface, ranging from swell, attack, offset, velocity attenuation, stereo panorama, pitch, humanization and even independent room release time control.

New to this version are the Ensemble All preset type (both standard and lite) which features all of the main articulations (including microphone positions) accessible through a single nki. Every articulation available can be custom mapped to different keys allowing for complete functionality. APE v2 ships with a number of mapping layouts designed for use with many popular virtual drum programs. Users can change these presets as they like and save off custom mappings for future use. This mapping system was designed to be used with the new MIDI playback system which can load and playback MIDI grooves. This MIDI playback system, in conjunction with the custom mapping system, allows for use of existing MIDI loops from other virtual drum libraries to be played back in APE v2. The product includes 400 hand-crafted MIDI grooves by a variety of talented composers and producers to get users started. MIDI grooves can be customized during playback by switching to half-time or double-time, add swing and tighten or loosen quantization based on a configurable grid. Additionally, a custom FX Rack Panel is included that exposes Kontakt's built-in effects via an automatable user interface and and also integrates 70 custom convolution reverb impulses.

Apocalypse Percussion EnsemblePercussion
by Soundiron  $249
Add A Review My KVR