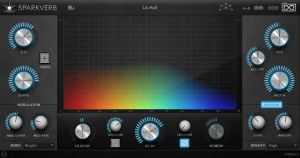 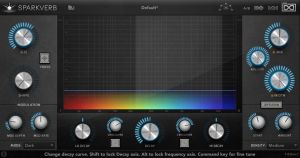 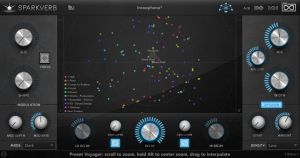 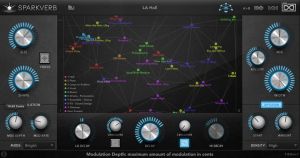 UVI has released its first effects plug-in, Sparkverb, a reverb geared towards achieving a fine balance of sound quality and CPU efficiency.

Having first made an audible appearance last year in UVI's Darklight IIx, a software instrument inspired by the '80s high-end sampling/sequencing dream machine much beloved by the likes of Kate Bush, Thomas Dolby, Peter Gabriel, Jan Hammer, Trevor Horn, Jean-Michel Jarre, and Steve Levine, Sparkverb, UVI's innovative reverb technology, is now available in its own right as a surround-capable, 64-bit processing plug-in namesake. Now anyone can explore the entire reverberation spectrum while working within the comfort of their favorite DAW.

Depth and complexity such as this typically involves having to deal with an accompanying dense and complex interface — not so with Sparkverb, where much thought has been given to reducing time spent tweaking in favour of time better spent being productive, thanks to a resizable — small (784x415px) by default or large (1176x623px) — GUI graced with the fewest controls possible to allow a high degree of customisation. Usability was a crucial consideration in its development.

At the core of this GUI is the Decay Editor, a frequency-based spectrum editor for speedily sculpting and refining reverbs. Adjust decay globally and across multiple bands with LO DECAY and HI DECAY time multipliers and associated CROSSOVER and Cut settings across a single canvas, for example.

At startup, Sparkverb creates a two-dimensional array of all available presets. Toggling from the main display (Decay Editor) to the Preset Voyager displays all Factory Presets and User Presets in a cloud-like arrangement according to their similarity and conveniently colour-codes them based on their category. Click-dragging in the cloud changes the current reverb setting by interpolating between the parameters of the adjacent presets — perfect for quickly creating new presets while watching controls update in real time to see what's happening.

Regardless of which mode you are working in, Mutate and Randomize functions are always accessible, applying small and large random changes respectively. Parameter locks are available on each and every control here, making these fast-track functions even more useful. Experiment within prescribed boundaries such as a fixed MIX (dry/wet) amount or (stereo/surround) WIDTH to seek out variations that work well for a specific need.

Sparkverb is built upon UVI's proprietary Parametric FDN Engine offering true high fidelity on as many tracks and busses as needed without worrying about CPU overload since Sparkverb can be instanced near-limitlessly.

FEATURED
50% Off
AX73Synth (Analogue / Subtractive)
by Martinic  $59.50
Add A Review My KVR
Was $119.00; Save $59.50 until 31 Oct 2021
$59.50Buy
BUYING!XCheckout
The Orchestra Essentials
Orchestra
by Best ServiceMercury-4 Polyphonic Synthesizer
Software Synthesizer
by Cherry AudioReason 12
Virtual Studio
by Reason Studios
Featured
An Introduction to Paragon ST