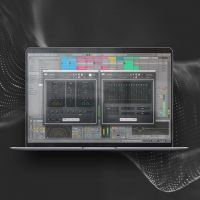 Abuser by Audiomodern is Soundware (e.g. samples or presets that load into other products).
Product
Version
1.0
System Requirements
Full Retail version of Kontakt 5.5.0 or higher is required
Tags
Tags:Synthesizer Sound CollectionAbuserAudiomodernKontakt Instrument
Soundware
For
Native Instruments Kontakt
Soundware
Formats
NKI
Copy Protection
None
My KVR - Groups, Versions, & More
10 KVR members have added Abuser to 4 My KVR groups 14 times.
Not In Your MY KVR Groups
(or group limitation prevents versioning)
7 0 I Own This
3 0 Favorites
3 0 My Actual Studio
+1 in private groups

Under the hood of this beast lies 1.738 pristine audio samples, direct from the Sherman filterbank, a filter effect box with unique tube sound overdrive. A pure analog machine which is not based on processor calculation speed. It's a 24dB/octave 4-pole dual filter module, a genuine analog circuitry with serious overdrive for the grungiest of sounds!:

From the front end you are presented with simple GUI allowing you to modify the patches and internal presets visually using the most common features that most synthesizers have. An easy to use interface on one screen, without a complex menu diving. So you can direct handling and quick sound making.

This stunning instrument is packed full of analogue modelled effects, powerful LFOs and envelopes. It is able to create a huge range of sounds, from filthy basses with extremely low frequencies and leads to futuristic electronica, distorted leads, mellow saturated melodic Poly-Synths and everything in between. We wanted to create something that put detailed raw sounds already at your fingertips, allowing deep and complex sounds to be built easily without fiddling, allowing you to concentrate on what is most important – the music.

Full Retail version of Kontakt 5.5.0 or higher is required.

In short, Abuser from Audiomodern is a sound source from the 70's generation of analogue synthesizer patches that offer simply controls and a neat UI to do it with. That may not sound like much, but given that the library is based around shaping those sound sources into styles of your own with further effects from your DAW or Kontakt much the same as was done 40 years ago with tape machines and strange spring reverbs, it's appeal shines through quite quickly in just a short amount of time.

32 Patches is not much though and I do think that a few more unusual FX or Pad sounds could have been added to it's list of Basses, Synth and Lead sounds that it ships with. On balance this would add weight to it's (Usual) 29 Euro price tag.

However there is no knocking it's raw sound quality, that begs you to question if it's really a sample based shining through with some really dirty and retro analogue sounds. I for one love the Synth and Lead sounds, that with a simple adjustment here and there and with the addition of some large reverbs, really give you a great sense of the period these sounds seem to come from.

Abuser is going to feature in my next musical journeys one way or another. And Audiomodern is quickly becoming a developer to watch with a host of stylish and eclectic offerings to start them off.

If you want a quick and dirty addition to your tracks without searching far and wide, then this may very well all you need.