Welcome to our very first MusikMesse Show Report, which is following our first ever NAMM Report. One of the best things about the business we are in is the fact that we get to go to Germany every year because there are so many software developers in Europe. It sure beats Anaheim.

Quick news flash: If you ever go to the Frankfurt show and want a break you should check out the castles on the Rhine. I have been attending the Frankfurt Show since the late 80s and this is the first time I have had a chance to do this. They were built by ‘Robber Barons’ to exact tariffs on the helpless merchants using the Rhine for commerce. Lucky for us they're gone now so it's just a really nice way to avoid the hoards on consumer day. 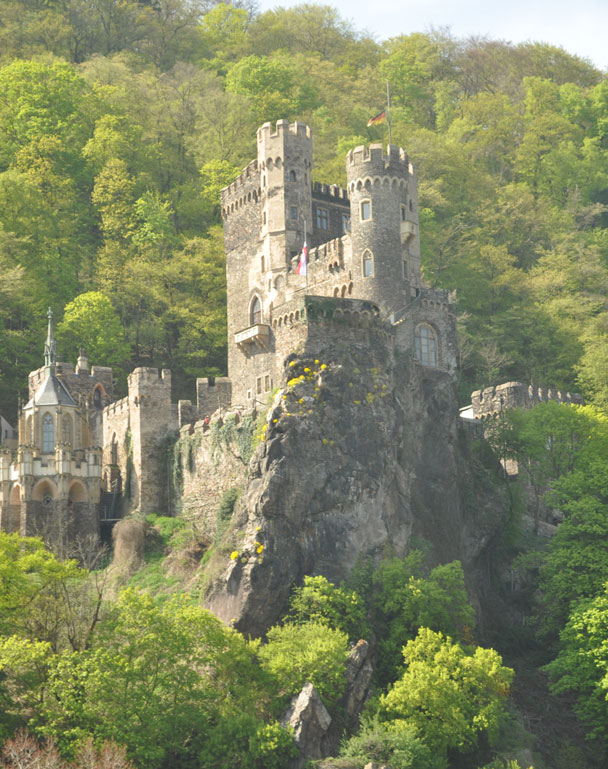 And about the show... One of the most interesting things about it was how many plug-in companies did not attend. The list includes IK Multimedia, Native Instruments, Rob Papen, ToonTrack, among many others. (Developers: If you weren't there and I left you off the list please let me know...!)

There are likely several reasons for the lack of attendance:

We sometimes hear people in the KVR community expressing disappointment that the price of a particular plug-in is so high. The plug-in developer community has been responsible for a lot of innovation in the musical instruments market over the last ten years. Innovation is expensive. These products take a huge amount of effort to make. They must be designed, coded, tested, and there is always a large support cost after the sale. If there wasn't so much piracy the prices could be lower because the companies would be able to sell larger numbers to recover the costs of developing the products.

The truth is that all of the companies love creating products for musicians to use, but they need to pay the rent too. My personal policy is that I’ll try anything, but if I use any software for a piece of music I will buy it.

BTW the prize for Best Demo of the Show goes to Boss for the demo of their RC-3 Loop Station.

That’s one person, one device, and a lot of creative talent. I think I’m ready to buy a Loop Station 'cause he makes it look so easy. 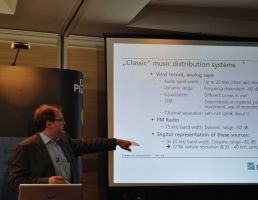 Worst Demo Award goes to Fraunhofer for their CODEC primer presentation. There were about 20 PowerPoint slides to go through.

Joking aside it is important to note that Sonnox has partnered with Fraunhofer to create the Sonnox Fraunhofer Pro-Codec (Price TBD) which allows mastering engineers to critically audition and encode to multiple formats including mp3 in real time within a DAW environment, and includes built-in encoding/decoding features with extensive monitoring tools. Mastering engineers will find this very useful because this is how most music is listened to these days.

Like NAMM there were more new iOS products than anything else in the technology area. There is an inter application communication protocol that allows apps to be synced so you can buy a drum app from one company and a synth ap from another and have them work together. Still in its infancy though. Though the processing is still a bit slow, the trend of recreating hardware in mobile software aps is picking up even more speed. I tend to side with those who believe that right now the iPad is a very cool controller (check out Omni-TR (Free if you own Omisphere) from Spectrasonics or the Griid (Pro version is $24.99) controller for Ableton Live).

Here is the big question: How will iOS ap companies make money…?

It will still be some time before there is a shake out because the category is so new and Apple is selling A LOT of iOS enabled hardware. In general the current trend reminds me of the time that ‘Multimedia’ was in its infancy. Apple had released Hypercard and there was a large number of multimedia authoring tools coming into the market. Subsequently a lot of applications from both existing developers and brand new companies were brought into the market in a fairly short period of time. As long as the number of new users grew at a fast rate developers could sell lots of product to people who just wanted to try news things on their multimedia computers. Once growth leveled off and competition increased the attrition rate picked up.

It’s not like anyone is going to compete by discounting the price when the average price has been set so low… (Buy mine! Save $.08!) If you were considering making a music recording app for the iPad check out Apple’s new GarageBand ($4.99) and then think of something else to do.

You can now connect USB keyboards. Apple is marketing the Camera Connection Kit ($29) for the iPad that includes a USB to data port converter. Any class compliant USB MIDI controller will just work and if it doesn't require much power you can get the power from the iPad as well. Below is an iPad mounted on StudioLogic’s new Acuna. That’s the Camera connector on the left. 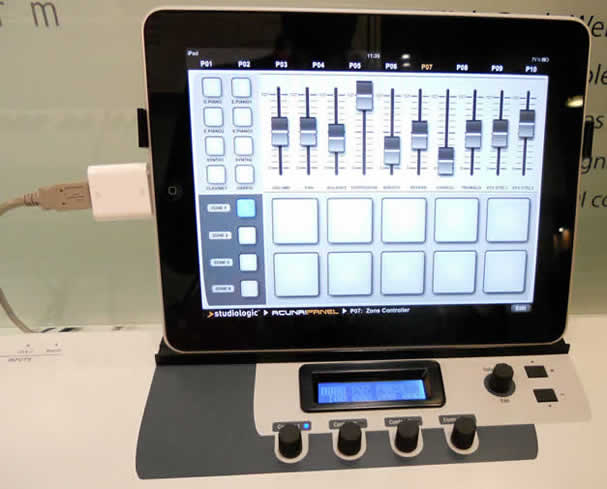 I am using one to connect my Korg Nano to my iPad and running one of several new synths. It won’t be long before this is the way to go.

Convergence is in full steam. For those of you who aren’t as old as me the Consumer Electronics Show (CES) actually started life in the basement of the NAMM Show years ago. We seem to have come full circle. (Note new Alesis iPad game controller on right)

At the Peavey booth Agile showed us a beta of their next version of AmpKit 1.3 with new gear and features. It will be released later this year. They’re not ready to announce any specifics yet, but we were pretty impressed with what they have done so far.

Muse R&D was also in the Peavey booth showing the MuseBox. It has come a long way since last year and they are hoping for a release soon. 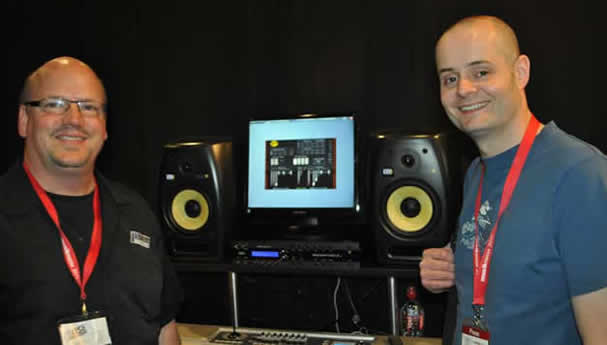 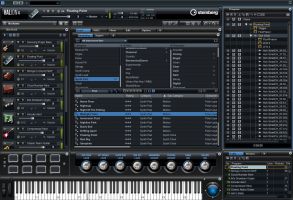 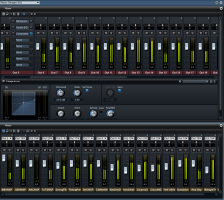 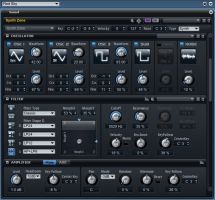 Finally, on the subject of iOS I want to give a shout out to my friend and former colleague Aron Nelson who has a great ap called unRealBook that allows you to access your music and/or lyrics in PDF form from anywhere. This is a clever use of the iPad for musicians. Check it out!

We checked out HALion 4 at the Steinberg booth, which was large and centrally located. Nice to be part of a much larger company like Yamaha! They have clearly maintained their commitment to the Messe.

In its fourth incarnation, HALion has undergone a massive overhaul and shift to an entirely new virtual instrument, transforming to Steinberg’s HALion 4 VST sampler and sound creation system:

HALion’s 4 implements the new and innovative VST 3.5 format in a couple of ways. It uses Note Expression for editing expression data polyphonically and the enhanced MegaTrig tool for programming instrument articulations, varying playing styles and complex conditional triggering modules without the need for page-filling scripting code. VST Developers should take note of this. 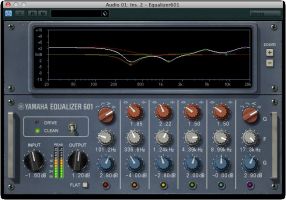 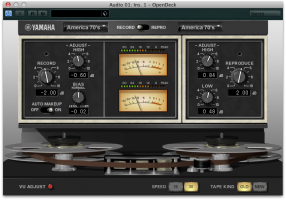 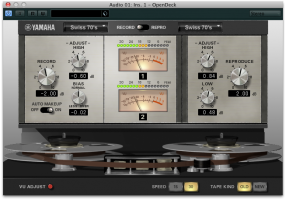 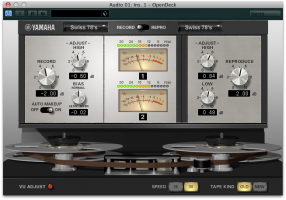 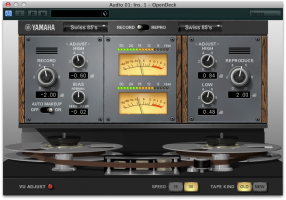 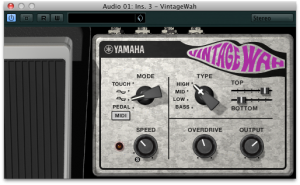 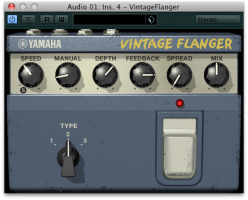 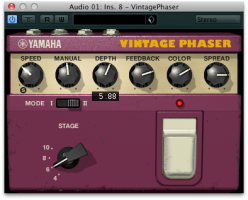 Pricing and availability of the plug-ins will soon be announced.

Steven Slate was in his booth demonstrating his latest products. This man has boundless energy! Check out the Trigger Drum Replacer. 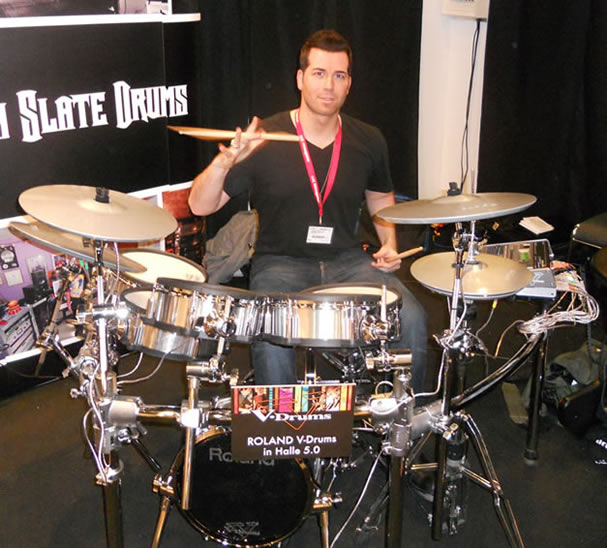 Zildjian was showing of the Gen16 products in a special room at the Movenpick hotel near the FestHalle. They are rounding 3rd base on their way to delivering a series of technology products thst they have developed in partner ship with the folks from Fxpansion and others. 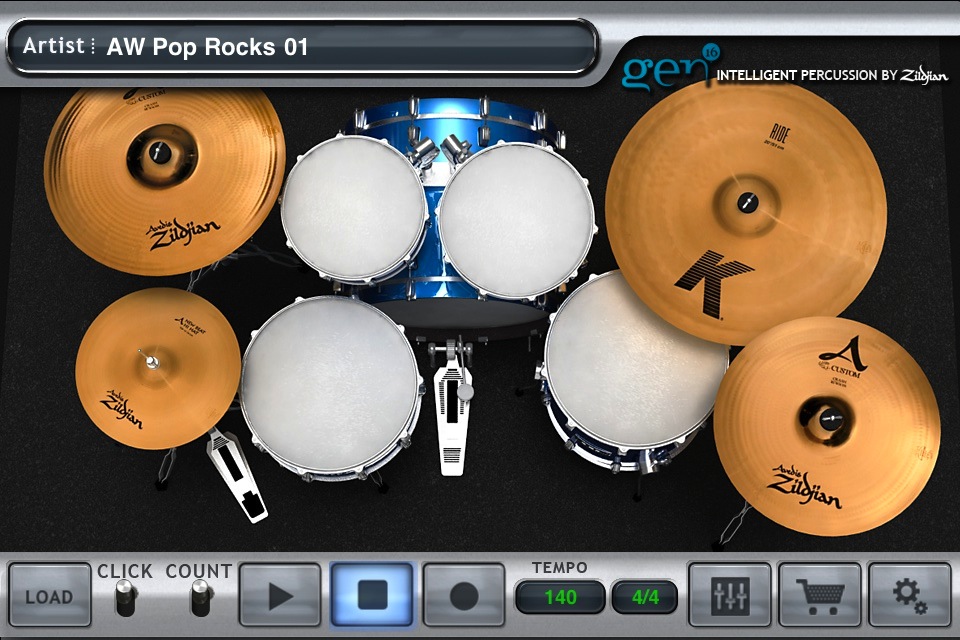 FXpansion, Modartt, and Arturia were represented in the Tomeso booth.

Arturia was showing their new Spark software/hardware product. Spark is really cool and it seems very easy to make beats. They have targeted the dance music market.

FXpansion was showing Geist, which is similar to Spark, but without any hardware of course. The Spark controller is a MIDI controller, which means it can be used with any software. Nice randomization features.

We spent some quality time with Niklas Odelholm of Softube of Linköping, Sweden. Their interfaces are very sparse and they focus their efforts on precision modeling of the various devices they have targeted. 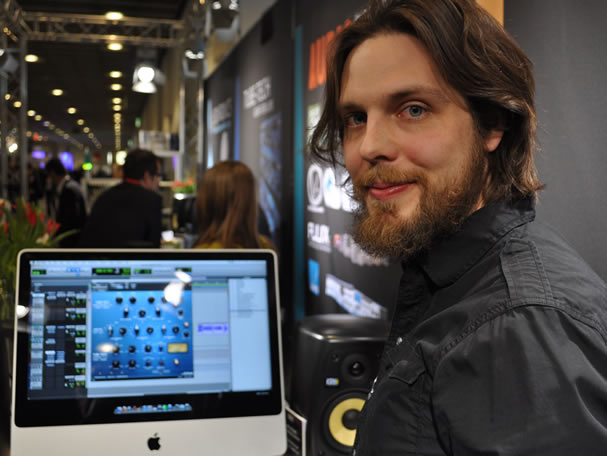 It was quite by accident that they got into the metal amp modeling area because it was not mainstream for them. Apparently they were contacted via email by a well-known metal guitar player at the recommendation of a mutual friend. He wanted to model his particular (Marshall JCM series) amp because he believed that the existing Softube product didn’t get the authentic metal sound he needed. After lots of back and forth emailing trying to figure out the logistics of how Softuber could get the amp to model it they discovered that they lived practically next door to each other. The result was the very cool Metal Amp Room ($199). Moral to the story is to always check with your neighbors first. They might have that mint condition vintage Twin Reverb you have spent your life looking for sitting in their garage...

Softube is an early supporter of the VST3 format. Among other things they get external side chaining and improved performance.

SM Pro Audio was showing the V-Machine. They are now bundling software packages with V-Machines as solutions. The first one that will be available is the Classic Keys Collection. The bundle includes special versions of Applied Acoustics Lounge Lizard, GForce MiniMonsta and Virtual String Machine, GSI Key Performer and VB3, and Sonicprojects OP-X. The company says it will be available soon.

Universal Audio was showing their new Lexicon 224 plug-in ($349) for the UAD system. A big sound and of course the large amount of processing needed for a quality reverb is off-loaded from your CPU to the UAD card. The free 5.9 update which includes this will ship in Q2.

Sonoma Wireworks has made a big commitment to the iOS. There were several products in their booth including one from plug-in developer Jim Heintz. He’s better know for his TimewARP 2600 plug-in, but he’s hoping to make a splash with his new SynthX iPad app. He is taking a pretty innovation approach to the GUI that takes advantage of the iPad’s multitouch screen. 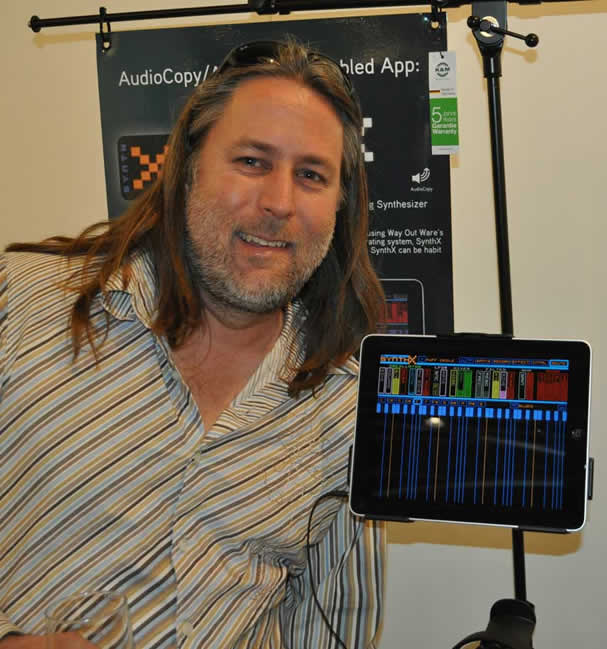 Spectrasonics had a good-sized booth and, as is often the case, Spectrasonics founder Eric Persing was on hand doing the demos himself. Eric was kind enough to sit with us for an interview, which will be posted soon. When this man talks we should all listen. Not only does he have a long term perspective gained over several decades of making products that we all use, but he very customer focused. That focus has resulted in a new (FREE) Omnisphere upgrade that boosts the number of patches to over 5,000. This company is doing well and sharing the benefits with their customers.

CopperLan seems to be getting some traction among developers with their MIDI networking technology. Several companies were showing products with CopperLan integrated: Radio Systems showed a version of their modular Millenium Platform console. OhmForce had a standalone version of MiniMonsta fully CopperLan controlled. Xils Labs brought the CopperLan-capable version of the Xils3 synth plug-in, and Feeltune's Rhizome was showing CopperLan inside their Groovestation.

There was a small Apple Solutions booth. Included were Sugar Bytes, Universal Audio and Best Service.

In summary I have to say that the people that run the Frankfurt Musicmesse have got to be a little dispappointed in the overall turnout. So, if you are a maker of musical instruments and you enjoy going to Frankfurt and drinking excellent beer (or Rheingau wines) while pounding down wurst and meeting customers from Scandinavia to South Africa and from Spain across the Europaen continent to Japan you should consider signing up a booth for next year. Afterall we want to come back too.