The Early Days of Software Sequencers

This is the second part of my perspectives and it's about the beginning of the transition from tape and hardware devices to computers.

Technology drives music. Once a talented individual gets a hold of a new technology and makes beautiful music with it the technology will evolve quickly. This was certainly the case with the computer. There was clearly a need for these software products. Sequencing musical events was taking off and the new technologies allowed music that couldn't have been created without these new tools. In fact computers can make mediocre musicians sound good, good musicians sound great, and great musicians incredibly productive.

Everything changed for musicians and recording engineers in 1982 and 1984 with the standardization of MIDI and the introduction of the Macintosh computer. It also started a sea change for the musical instruments industry. MIDI allowed a standardized way to send musical data between devices. The Mac had a Graphic User Interface by initial design and the 512 x 342 screen of the Mac could display significantly more information than any LCD display at the time.

There were already some MIDI sequencing software products available for the PC running DOS in 1984, but the lack of a PC graphic user interface made them unusable by the faint of heart. Windows didn't appear until later and wasn't useable by musicians in any kind of professional environment until Windows 2.0. Always an innovator under the guidance of Ikutaro Kakehashi Roland had an early software sequencer application, but its interface was one step above command line, making it very cumbersome.

One Silicon Valley engineer who noticed the potential of MIDI and the Mac immediately was Dave Oppenheim, who had recently stopped working for Androbot (an early venture capital backed personal robotics company), and was thinking about what to do next. Dave and I had been housemates while we both attended Stanford University in Palo Alto, CA. Dave was a Music/EE major (also a classically trained pianist with perfect pitch!) and I was an Music/Art Major (Hunh! No really. I'm not joking).

Dave had been messing around with synthesizers as long as I had known him. In fact he had created his own interface to play an Oberheim SEM from the keyboard of a Vox Continental organ in the late '70s. (An unfortunate side effect was the voiding of his warranty.) A later project was a hardware device that intercepted the keyboard connector inside an Oberheim OBXa. His box had several buttons, each of which would record or play back a small sequence.

Dave's idea was to use the Mac to replace the dedicated hardware that people like me were using in recording sessions. In November of 1984, he bought a Macintosh, and after learning to program in a GUI environment, wrote the first version of 'Sequencer' (a software version of the aforementioned box) in six months. I loaned him my DSX for a couple of weeks so he could make sure that his software would be able to everything the DSX could do.

In order to connect to the Mac he designed a simple MIDI interface that could be connected to the printer and modem ports (RS-422) and in a stroke of brilliance made the package narrow enough so that one could screw two separate interfaces to the ports on back of their Mac and get a total of 32 MIDI channels. 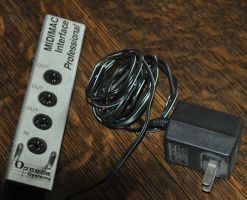 In 1985 he hooked up with Gary Briber, a friend from high school, and formed Opcode Systems. Though he asked me to get involved at the beginning I was too busy trying to be a rock star, and opted instead to help once a week with tech support and writing user manuals. Briber lost interest after about a year so Dave asked me to be fully involved. It was an easy decision given the momentum the company had generated. A new category within the musical instrument industry was growing very rapidly and Opcode was part of it.

The first three products; MIDIMAC Sequencer, MIDIMAC Patch Librarian, and the MIDIMAC Interface were announced at the 1985 NAMM Show in New Orleans. Shortly after that we received a nasty letter from Apple, so the names had to be changed.

Opcode was not the only player in this new category. There were several other companies of note. Mark of the Unicorn (MOTU) who created Performer, also published a program called Personal Composer, which was the first notation program available on the Mac. (Halley's Comet?) Passport Designs, whose founder Dave Kusek has gone on to further notoriety in starting up Berklee College's online school, had a cross-platform sequencer with the first 'piano roll style' editing interface. 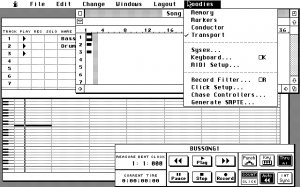 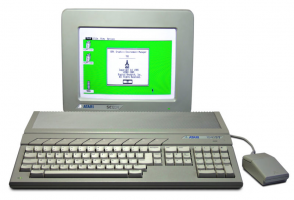 There were also two successful German companies, Steinberg and C-Lab that developed on the Atari. The Atari had been developed primarily as a gaming platform, but it did have built-in MIDI connectors. It was more popular in Europe where Macs were too expensive for musicians at the time. The Atari operating system was rudimentary at best so the Atari music developers had to write around it or fill in the blanks. Atari kept the price down by sacrificing quality. In fact most serious musicians kept a spare handy.

Despite the fact that Dave Oppenheim was my friend and future partner I started using Mark of the Unicorn's Performer rather than Dave's MIDIMAC Sequencer for one key reason. Performer gave you access to the MIDI data so that you could edit each note. This was critically important for a guitar player not particularly skilled in keyboard playing, but also because data coming from a guitar controller always needs to be filtered and edited.

Dave was an experienced engineer messing around with a new protocol, so there were no established rules and his instincts took over. He looked at the QWERTY keyboard of a computer and asked himself why not use all those keys for various tasks. With this in mind he went about assigning all the keys to something. For example, each sequence could be triggered by a letter key. This became a visionary feature called 'Players'. Gerhard Behles (founder of Ableton) will tell you that Opcode's Players feature was an important influence when he designed Ableton Live.

MOTU, who was Opcode's chief competitor and owned the largest sequencer market share on the Mac platform, had a different approach to the GUI. Performer utilized a transport that emulated that of a tape deck. While Dave's GUI was more functionally powerful, Performer's was more intuitive for musicians.

Ultimately the fact that I used Performer became a benefit during the development of Vision because I could show Dave how it worked and why people liked it.

MIDI recording wasn't the only thing computers could be used for. Another big category was sound design. MIDI was designed to connect several hardware devices and the companies that made these products were learning how to use the new protocol as well. Instead of the multitude of patch cords, buttons and knobs that had previously been used to change the sounds of synthesizers, MIDI device manufacturers (Roland, Korg, Yamaha, etc) were cramming the parameters into small LCD displays but this made editing the sounds more and more difficult. In addition, the internal memory of the extremely popular DX could only store 32 different sounds. If you wanted more you had to buy an expensive sound cartridge and even those could only add 32 sounds.

At the same time Dave was writing the sequencer he created another Macintosh application called Librarian that could store the sounds of his MIDI-retrofitted OB8, the Casio CZ-101, and the Yamaha DX7. Librarian could hold an unlimited number of sounds (or so we thought until we ran into LA studio pianist extraordinaire Mike Lang) to address the storage issue. It also allowed the user to organize the sounds and transfer them back and forth to his MIDI synthesizer. It even had built-in algorithms that a musician could use to create new sounds.

David Zicarelli and David Oppenheim met at a small music technology fair hosted by Stanford. Dave O was offered a chance to sell his MIDI interfaces out of a booth when David Z happened by and bought one. A few months later, just before Dave O headed off to the 1985 Summer NAMM Show in New Orleans to debut the Opcode products, David Z showed him a program he created, an elegant graphical representation of the Yamaha DX7's editing system. Dave Z's DX7 editor allowed a musician to see all the important parameters at once making it easy for musicians to create new sounds on their synthesizers and we liked to think it helped spawn new musical styles by lowering the barrier of entry to sound design. He suggested that Opcode could show it as well, and it was immediately licensed for distribution. 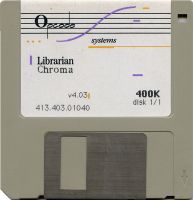 Shortly after that we combined Dave O's librarian with David Z's DX7 editor. They became a critical part of Opcode's success and also allowed MIDI manufacturers to save money on knobs and buttons. Zicarelli has since become an important part of music software technology history developing early algorithmic products like 'M' and 'Jam Factory' and developing Miller Puckett's groundbreaking graphic compiler 'Max' (named for the digital music pioneer Max Mathews).

One might ask why should the KVR plug-in community should care about this. One of the more enlightening meetings I have had in the last 10 years was at the studio of a well-known artist, who had a large studio full of state-of-the-art gear, a powerful computer, and networked audio running throughout. He was using a number of plug-ins with his DAW, but when we started to hook up a Receptor in his system the idea of a MIDI interface connection seemed pretty foreign to him. Although software plug-ins make MIDI more transparent some of these people and companies deserve recognition. For the historians in the group I've tried to be accurate and I'm sure you will point out if I am incorrect or have left something out.

I would like to thank Dave Oppenheim, founder of Opcode, first and foremost for tolerating me as his partner at Opcode for 13 years, but also for contributing his time to this post, helping to ensure a level of accuracy.