From the Architect beta thread:

Related question:
Is it possible to import a MIDI file or any MIDI data from outside Architect into a mono or poly sequencer? Paste after copying from the DAW piano roll didn't work; long shot, I suppose.

Short answer: no, not yet. Essentially, it's because some MIDI files cannot be directly converted to step sequences. However, the general consensus seems to be that people want to be able to do this when possible, so I've made some progress on allowing this, and it will be possible in a future iteration.

I wonder if it'd be easier or in any way preferable to instead just add lots more ways to modify/modulate how imported files play on their own, either in their properties as with sequencers (that's basically what I wanted when trying to paste stuff in), or with a collection of sort of internal MIDI FX, as in Logic. Or by adding the ability to host already existing MIDI FX plugins from elsewhere, in the playback chain…?

I don't suppose you've had much time for, or maybe even any wish to, keep tabs on any other MIDI tricks other developers are getting up to these days, but fwiw, I must say I've been inspired by what John and Shane at Pluginguru.com are doing MIDI-wise with their new hosting device Unify, as it's just the sort of thing I'd like to do with Architect along with all else it offers. Here's a shot of two of the internal MIDI FX they've come up with for modifying MIDI file playback: 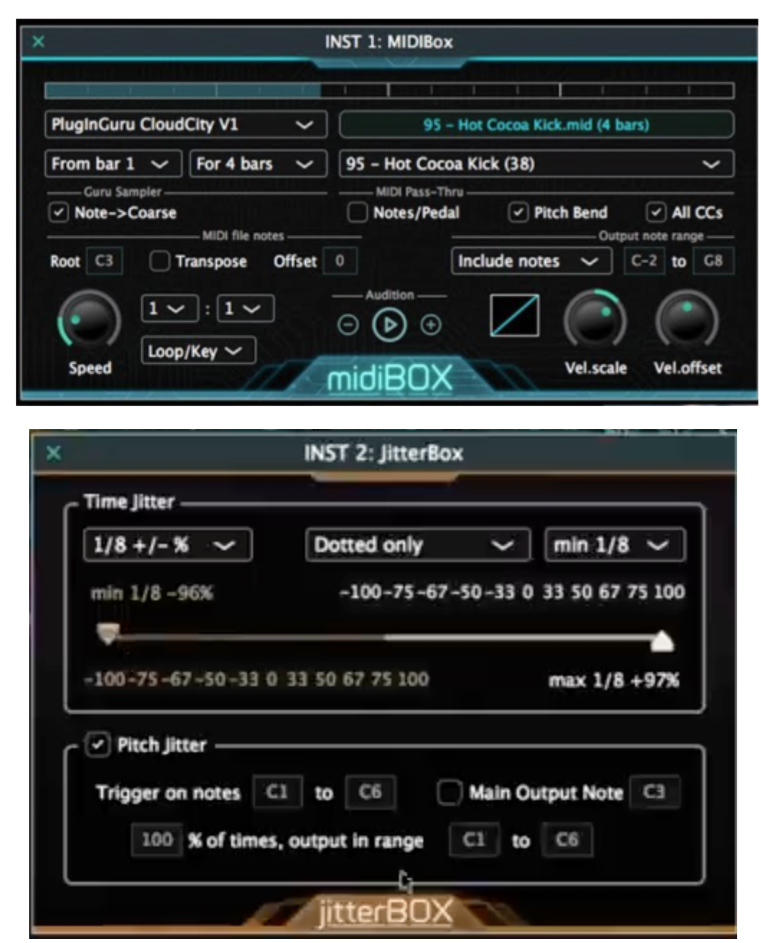 They're shown in action starting at 1:28:22 in this recent livestream:

Of course, Unify itself could already be hosted in Architect, and there's some chance they'll pop out these FX as individual MIDI FX plugins someday, so maybe it's not so important to duplicate what could just be hosted…

David wrote: ↑
Sun May 24, 2020 12:31 pm
I wonder if it'd be easier or in any way preferable to instead just add lots more ways to modify/modulate how imported files play on their own...
Just thinking aloud…

Thanks for the links and write up: plenty of food for thought for me here. I do think we're on the same page, though, as that is the goal I'm heading towards.
Architect, the modular MIDI toolkit, beta now available for macOS, Windows, and Linux.
Top

Oh, and it'd be SO cool to have some way to algorithmically enter notes into the existing sequencers, as you can in the Toybox piano roll using LFOs, etc, shown at 8:10 in this video:

Of course, Reaktor's got MIDI Out, and is available as an AU MIDI FX, so, all we'd need is hosting (and capture!) for those and any other MIDI generators:)
Top

I believe that a step sequencer's Step Record inlets could be used to do something similar to this.
Architect, the modular MIDI toolkit, beta now available for macOS, Windows, and Linux.
Top
5 posts • Page 1 of 1