When I play back something in RC with my FluidAudio SRI-2 audio device, the playback is way too fast. If I then change it to my onboard PC soundcard, then the behaviour is normal. Is there anything that I should be doing, or is RC misbehaving?

This is very strange indeed and most probably the bug is in RC. The playback timing (when an audio interface is used) depends on the sampling rate. I suspect that the sampling rate is not reported to, or detected by RC properly.

Please do the following: Start RC with the Alt key held down. Keep it held down until you see a message on the screen. Then go to Settings / Audio, and set the audio interface. Test the audio. Quit the program. Do not switch audio devices frequently

Next time, I'll post it in the right place

Next time, I'll post it in the right place

Will you choose a sample rate from the menu? You can choose the same rate, but select anything.
What happens when you test audio with the "Test Audio" button? Does it sound normal?
http://www.musicdevelopments.com
Innovative music software for creative musicians - home of RapidComposer and Syne
Top

Ok, reporting back..
When I press the "Test Audio" button, it sounds the same as when I play it back with the FluidAudio audio device: not good, way too fast.
When I change the sample rate from "default" to 44100 Hz, it plays back at the correct speed, however, there's an enormous amount of crackles present, and it drops notes (all notes on the same beat in my example) randomly, as far as I can see.
When I switch to my PC's sound card (ASUS Xonar DX- with ASIO) all behaviour is normal, good sound and no dropping of notes..
So fortunately, I have an alternative.
Cheers,
Xpoes

Hi xpoes,
thanks for reporting back. I don't think there is an easy fix for that; that audio device does not behave well. I would check if there is an updated driver for it. Bad timing in drivers can cause that crackling sound. (I experienced the same in the past when I updated my Focusrite driver; I had to re-install the old one...)
Thanks,
Attila
http://www.musicdevelopments.com
Innovative music software for creative musicians - home of RapidComposer and Syne
Top

Thanks for looking into it, Attila.
I'll stick with my PC sound card for RC, that's the easiest thing to do

Stick to the built-in sound device of your computer is the worse solution, in fact. I'll explain why just below.

I highly suggest to buy a (very small) Behringer UCA-222. Even on Amazon or Ebay, if you want. Around 30 dollars. And a weight of only a few tens of grams. It is an example among a few other models (in several trademarks, but this one is worldwide known for its quality).

Not only it is excellent, but an external device, even this one, also allows you to reserve it only for your DAW and instruments, keeping the built-in sound card of your computer always available for all the other sounds (Youtube videos, system sounds, etc.), both working independently, in parallel, without knowing each other. It is something which can be very important if you want to follow some video tutorials (and they are plethora on our RapidComposer threads for example and also about many, many VST plugins) allowing you to make at the same time the same gestures on your own instruments as shown on the tutorials without having to toggle at each instant between the drivers (the ASIO one and the non-ASIO one) of your built-in sound device. Otherwise you will have to juggle at each gesture, at each minute, and it makes tracking a tutorial so taxing that it immediately becomes unmanageable. And I speak only here about tutorials !

And it has quasi-no latency. Pay attention that the built-in sound devices of the computers are NOT made for the music making but only for music listening, meaning that they all have a long latency. All the sound devices (even the worse) made specifically for music making all have a much lower latency than any built-in sound device. It is very important if you play music on a complex VST or instrument (several layers or several outputs, bi-timbral instruments, etc.)... or if you compose music scores having several simultaneous tracks.

And this one, the UCA222, doesn't use any specific driver. You install the free ASIO4All and that's it.

It stands in your hand : 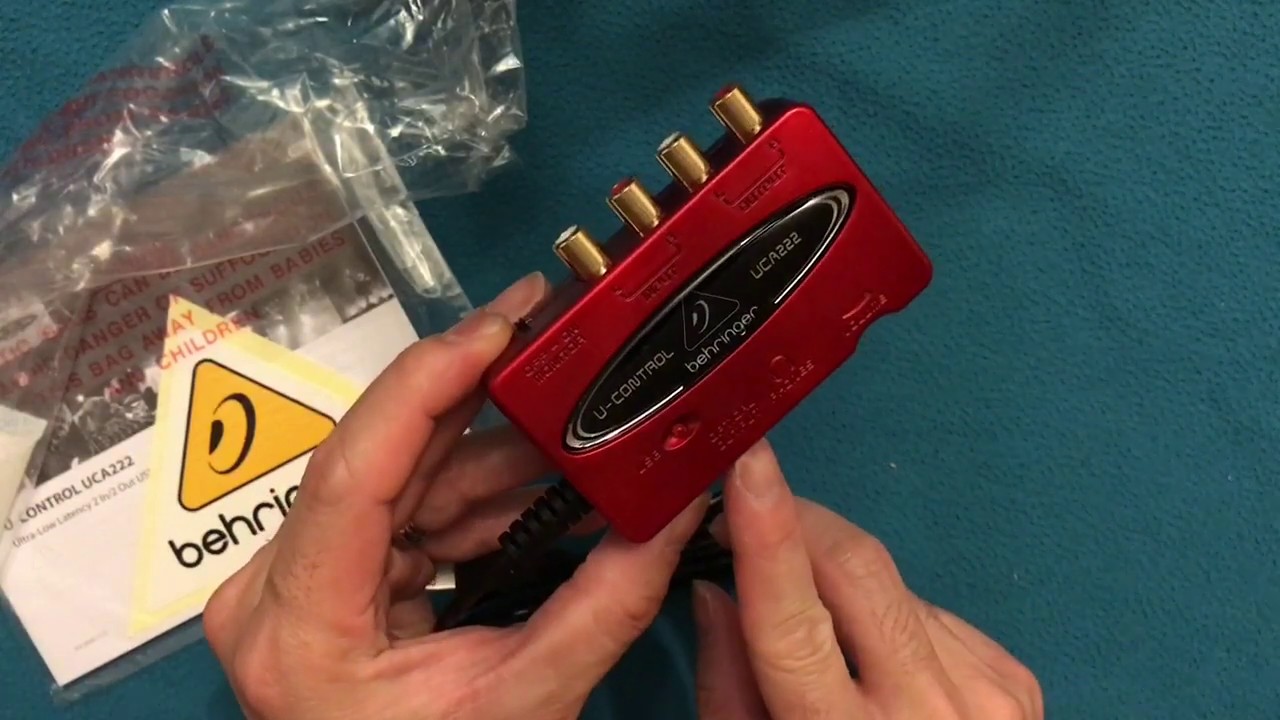 If you check the PDF manual you will see how much it is simple to connect and to use:
Behringer UCA222 international manuals

You will see online that the reviews are everywhere innumerable and all excellent. A must have for very small setups. Think also the arguments I made about the use of any external sound device instead of the built-in device of your computer... And its price is much less than the price of your trolley at the output of your supermarket ! Around $30, that's all !

And this one is just an example of some sound devices being twice very small and excellent. There are a few others (I don't forget that there are perhaps other models of that kind, and from the same brand or other brands), but I show here only the one I prefer among those that I know. The most important being the reasons to use such tool instead of the built-in sound device.