are you excited? We certainly are, because it's finally time for you to get a sneak peek of Uhbik 2.0, a big and long awaited update with loads of improvements, and tons of fun stuff added. 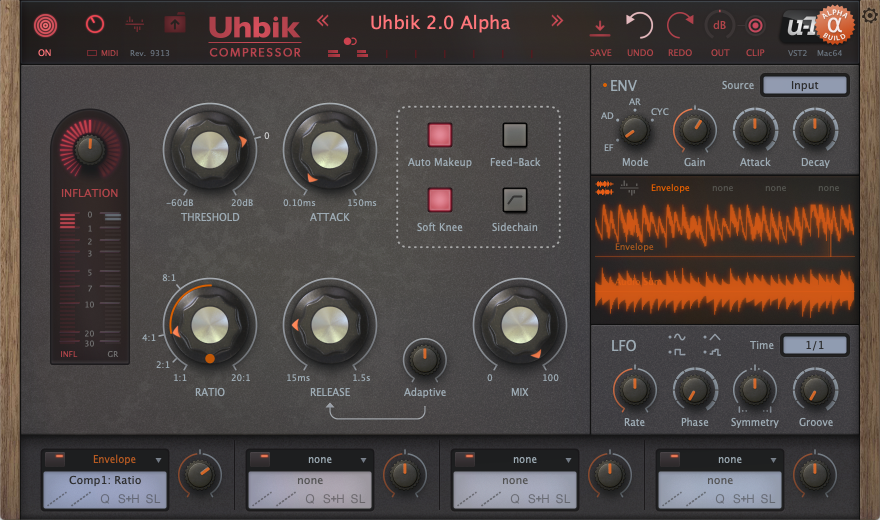 Don't worry that the installer and the plugin still mention version 1.3.1, that's ok.
As this is an alpha version, not everything is already super clean and polished, and updating version numbers wasn't very high on the list of priorities.

This version will update your previous Uhbik installation.
Your serial remains valid, and Uhbik 2.0 is fully backwards compatible.

But please note that this is an ALPHA version, used to gather as much feedback as possible. This means that pretty much "all" things can change between now and the official release. Thus there is no guarantee that things like parameter ranges, or host automation lists will stay the way they currently are.
So please don't use this version for important projects, and don't expect projects made with this alpha to stay fully compatible to the official 2.0 release version.

Uhbik 2.0 comes with a completely redesigned GUI, an all new modulation system with four modulation slots, a multifunctional envelope, an LFO, and a modmapper, so you can finally create much more interesting and lively presets which react to the incoming audio signal.
A simple addition of some modulation will also quickly breathe new life into the old Uhbik factory presets, so be bold and experiment with all the new options.
And to help you see what's going on, we added the scope you might already be familiar with from Hive 2.0.

There is also a brand new member to the family. Say hello to Uhbik-C (can you guess what the C stands for?).
Some other Uhbiks received additional parameters, like Uhbik-P with some new phaser modes.

Uhbik 2.0 also received our new preset browser, which got some upgrades by now, with the option to import/export favourites, and file system drag&drop support.

And, of course, there are many other improvements and bug fixes included.

One important part: The Uhbik 2.0 Mac version is now notarized, so it should be fully compatible with the current and future versions of macOS Catalina.
Please let us know if you experience any issues with the Mac installer.

IMPORTANT: Due to the new preset browser, please install the update into the same location as the previous version, and select all previously installed plugin formats during installation. Alternatively, you can remove the old files, and start over with a fresh installation. It is crucial to not install old and new plugin versions side by side, since the old versions can not cope with the new preset browser, and might crash.

Note that in order to use MIDI signals, you might have to consult your host's documentation about how to route MIDI to effect plugins. This varies from host to host.

Also note that there is still a lot to do (as you can see in the rather big known issues list). But we didn't want to wait any longer, because we want your feedback, and we want it now.

This is awesome!
Ableton+Modulat.Bitwig.Omnisphere.u-he.VCV Rack
Top

Also, some more words and answers:

masterhiggins
KVRAF
2183 posts since 31 Dec, 2004 from People's Republic of Minnesota

Holy shit. I’m all over this. Looks amazing.
Top

Wow!
Looking so forward to this!
As someone who uses Presswerk for everything all the time, in which cases will the future me rather go for Uhbik-C?
Or to put it an other way, what is Uhbik-C that Presswerk is not?
Top

krans wrote: ↑
Mon Nov 11, 2019 10:43 am
Wow!
Looking so forward to this!
As someone who uses Presswerk for everything all the time, in which cases will the future me rather go for Uhbik-C?
Or to put it an other way, what is Uhbik-C that Presswerk is not?

It's got upward compression ("inflation") and of course, 5.1/7.1 surround processing.

It also has modulation. You can for instance sequence the Mix over a beat. You can do weird feedback things by modulating Threshold or whatever with an envelope follower put on the output.

I think there's potential for a lot of crazy things, many of which we haven't explored ourselves yet.
u-he.com | Facebook | Tweets
Top

Wow! The compressor looks nice. But please also check out upwards compression as in Bitwig dynamics
Bildschirmfoto 2019-11-11 um 19.42.29.PNG
or

You can make sounds fat without affecting transients at all. I guess inflation is meant to emulate this, but in upwards mode of bw dyn and tb buscomp, you also can control attack and release (and range, so no noise, much better than a gate). I would prefer such a "reversed"/upwards switch. And inflation knob then "range" knob instead. Flexible softknee would be nice, too. Also, is it possible to make the attack minimum even lower, almost like a limiter?

Anyway, looks and sounds great.
You do not have the required permissions to view the files attached to this post.
Soundcloud Bandcamp
Top

Looking forward to Linux builds. I suspect these will come toward the end of the beta phase?
Top

Looking forward to Linux builds. I suspect these will come toward the end of the beta phase?

Yeah, unfortunately our Linux builds fell out of sync recently - some major changes need some attention. We hope to bring them back on track soon

Hehehe, would be great to have an audio demo of what you mean

It also has modulation. You can for instance sequence the Mix over a beat. You can do weird feedback things by modulating Threshold or whatever with an envelope follower put on the output.

I think there's potential for a lot of crazy things, many of which we haven't explored ourselves yet.

Are all parameter automatable in Pro Tools? It could become a good option for Postproduction.
Thanks
Top

There is no Christmas like a u-he Christmas... big thanks to the team! Downloaded this one ASAP and eagerly awaiting some time to put everything to the test
https://dailypatcher.com
https://www.instagram.com/dailypatcher/
Top

Will there be an intro price?
Top
178 posts