Why not work your way through that Artist Development Course linked a couple of pages back (or just find it in Tutorials)? Do the Homework. Write it out & all - like I was Uncle Satan, sorry I meant Mr Sony. Identifying & Addressing the Fears is what the whole course is about. Once we have that in-the-bag we will work on music

I'll let you choose if you want to do that privately or publically (right here in this Foum setting, or on the actual pages). I'd love to see you do it publically as it can help many people to see what happens in this sort of setting (the lesser discussed side of being a Manager/A&R/Producer person). It will be harder to end-run around the fears if it is public. I'll know either way

You got a deal. How much is the course?

Can't pass that up. I'll start first thing in the morning. Off to bed in a few.

First day of the rest of your life...
Benedict Roff-Marsh has left find me at
http://www.benedictroffmarsh.com
Top

If you're good enough.

I know 2 persons who make their living as a songwriter. They write for practically every famous singer/band/artist in my country.

How they got started? Other made connections while being an artist by himself and started to push his songs that didn't fit in his artist profile to others.
Another just pushed his songs to different artist until one was like "holy f*** this song is great" and suddenly everyone wanted something written by him.
https://open.spotify.com/artist/3mAifM6 ... 5k2PZXdmJw

I know 2 persons who make their living as a songwriter. They write for practically every famous singer/band/artist in my country.

How they got started? Other made connections while being an artist by himself and started to push his songs that didn't fit in his artist profile to others.
Another just pushed his songs to different artist until one was like "holy f*** this song is great" and suddenly everyone wanted something written by him.

Obviously someone "makes it" seeing songs keep appearing. Altho I do know that at least one major label has a system in which many aspirings put bits & pieces of ideas into a pigeon hole and if someone likes the idea, it gets sent to someone to develop a bit more. Not exactly the Dianne Warren method. More like a spider.

Where are you and who are these people (or the famous artists at least) - what with me not living on the planet of cats?

In Finland.. Only 5 million people here so the circles are very small

I bookmarked that tutorial page of yours

I've also complimented him on his lyric-writing, but he doesn't seem to see them as worthy

This is a quote from a recent interview with Jakko Jakszyk, a lifer musician who's been the frontman for King Crimson since 2013:

"Every week some aspiring musician writes me looking for some advice on trying to make it, and I don't have a lot to tell them. And it really pisses them off sometimes because they think there's a magic bullet and there isn't. There's no magic. Someone, somewhere, at some point, might latch onto you and give you an enormous amount of exposure that will enable you to continue doing what you're doing. You can't legislate for that. There is no magical formula. Anybody telling you that there is, is full of shit. I've got a million stories of being on records that were enormous hits. Now, that's not to say that they didn’t deserve to be and they didn’t have musical validity, but they've had a moment of extraordinary fortuitous luck that's enabled that record to suddenly be where it ended up."

And another, from the same interview:

"So, what's the most important thing, as far as advice? It’s don't be an asshole. We all know musicians who are geniuses and brilliant players, who are also difficult and a pain in the ass. I think quite often you're more likely to get work if you're a nice guy and not a pain in the ass. But more than anything is the element of luck. Luck plays such a big part in this. Some of the most talented people I've ever met are people no-one's ever heard of. And some of the most averagely-talented people I've ever met are very successful."

Yes, I understand that luck is involved. The distributor of the guy who wants to do my song just landed in the hospital. So this project will be delayed indefinitely.

Anyway, not mentioning any names (because I don't want to throw anybody under the bus) I was PM'd and warned to be careful about anybody that I get involved with because you don't know who's on the level and who's not.

Well, I look at it this way and this is what I told him and I'm going to post this publicly.

Benedict, as this is costing me nothing but my time, I figure I have nothing to lose by working with you. Worst case scenario is I'm no worse off than I am now. So, for me, this is a no lose, at worst, break even proposition. Trust me, I am going into this with very realistic expectations. I don't expect you to make me a star. I don't even expect to get a song recorded and distributed. My only expectation is that I learn something.

Having said that, I am now going to get to work on this.
80 Soundbanks including Falcon, Softube Modular, The Legend, Avenger, Omnisphere 2, Serum, Diva, Dune 2 & 3, Synthmaster, Zebra 2, Bazille, Arturia V 5 and 6, Repro-5 and morel

There were no questions at the end but this is what I got out of the article. Don't depend on platforms to make you a success. They only make themselves a success at our expense. Develop yourself as an artist. This is a lifelong process. My best work is still ahead of me. Hook up with somebody like a Bob Ezrin who will kick your ass and make you a better artist.

That's what I got out of this article. On to lesson 1.
80 Soundbanks including Falcon, Softube Modular, The Legend, Avenger, Omnisphere 2, Serum, Diva, Dune 2 & 3, Synthmaster, Zebra 2, Bazille, Arturia V 5 and 6, Repro-5 and morel

Damned good question. I write in so many musical styles I guess I'm a chameleon. And I feel I write equally well in all of them. So I'm versatile and can write for a broad range of artists.

As far as my image goes, not sure that's relevant for a songwriter as I'm not in the foreground, but I do have an online persona. 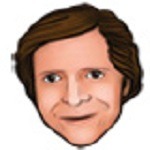 I like it. Adds some mystery to what I may actually look like. I do have real photos of me however if you feel this persona isn't appropriate.

What a pity, that would have surely changed everything!
http://www.martinjuenke.bandcamp.com/music
Top

What a pity, that would have surely changed everything!

This lesson appears to be targeted more to performing artists than songwriters. I don't know anything about Diane Warren or Jim Steinman (my 2 idols) but I can recognize their songs, especially Jim's, when I hear them.

If I were to make a pitch to a prospective agent, publisher, producer, artist, whoever, it would be something like this.

"Songwriter with 42 years of experience, able to write in multiple genres including pop, rock, alternative, electronic..." and so on. Let them know that I'm versatile. Probably put together a portfolio of my best songs in each genre so they can hear what I'm capable of doing.

This may or may not be the right approach (I don't know, which is why I'm here asking for help) but this is what I would do.

I don't have a web page with my bio, songs, etc. I know I should do one. I will. Not right now. After I complete the 11 lessons, then I'll go back and do all the long term projects. I assume there will be quite a few of these. This appears to be the first one. I am making a list of them and when I've finished the last lesson I will begin work on each project until each one is completed. I assume this will take months to complete. One step at a time.

I think I am very far along in this process. If not, then I've wasted the last 42 years.

So what are my strengths?

The ability to listen to just about any genre and adopt my writing style to it while still making it my own. I feel I do this very well. That is what, I feel, sets me apart from everybody else.

Whether or not this is a good or bad thing, that's for you to decide. But I most certainly have a style in my writing and I'm damn proud of it.

This was a very easy one. My main instrument is piano. Been playing for 42 years.

Here is a piece I wrote recently JUST piano and me singing. No glitz. No fancy mixing. Just pure music.