If I can express this in a piano roll with a mouse, I prefer to take this shortcut.

Forgotten wrote: ↑
Tue Dec 24, 2019 6:36 am
It probably didn’t work as it’s not very good advice. Chords are not the start point for composition, they are the accompaniment; a result of harmonizing the melody.

My suggestion would be to write a melody then harmonize it as you feel appropriate.

ugh, what? You do understand that these are just two different approaches to compose pieces? And also, accompaniment is absolutely not the "chords".

But melody first approach is the bad advice here. Someone is 6 months into music production, do you really think that person has the foggiest idea of what "feels appropriate" when they make a melody and try to harmonize it?

There's a reason for the "chords first" approach to be often recommended for beginners and it's simple: it's easier way to go about. In the past, in particular among rock musicians, you often had guitarists that simply played the common open position chords (E, C, G etc) that they knew how to play and they just sung the melody on top of that. Which incidentally contributed a lot to modern modality in music.

Melody first approach is more common when, for example, you work in the industry and you are tasked to create a composition around some sung piece that a singer came up with.

And of course, these methods aren't exactly mutually exclusive either. Often chords first approach is just chosen out of practicality, whereas melody first usually can create more interesting results when harmonized properly (but harmonizing properly is a whole other matter)
Top

roman.i wrote: ↑
Tue Dec 24, 2019 3:30 am
...but found that the chords were too "overwhelming". What I mean by that is that if we're talking about modern progressive or techno music styles I usually don't hear tracks so "complex" musically. Actually, I hardly hear electronic music with chords, maybe because I don't have musical hearing or there are really no chords but only baselines and melodies.

It seemed to me that the type of composition the OP is looking for is not to find a melody to sit on top of chords, and if there is harmonization in the type of music the OP wants to make, he’s not finding it in stringing together chords as a start point.
Top

I'm stealing this one. Too many fine applications for it, I can't help myself. Apologies up front.

roman.i wrote: ↑
Tue Dec 24, 2019 3:30 am
So back to my issues, I would appreciate to hear some thoughts and recommendation how to continue and what skills to develop to make a progress.

Good job on learning the basics of electronic music production and sticking with it so far! By now, you have probably realized that it's a lot harder to produce good electronic music than you would think

Regardless of muscial background, anyone that starts out in electronic music production will face a pretty tough learning curve - especially in the beginning. It can be frustrating at times, but rest assured that it gets easier and much more enjoyable and rewarding over time.

Based on your post, I would like to suggest that music theory is probably not where you need to focus right now. As others have already mentioned, you certainly don't need harmonies or chord progressions to make music and it's quite possible to make e.g. techno with rythmic elements only.

Instead of studying music theory, I would suggest that you import a track you like into your DAW and try to recrate it from scratch. Try to match melodies and harmonies (if any) by ear and replicate the sound and balance of all the elements as closely as possible. And don't worry... unless you are quite accomplished, your new track will sound NOTHING like the one you are trying replicate

If you get stuck, Point Blank have some videos on YouTube where they deconstruct classic house tracks (including chord progressions).

Imitation is the most efficient way to learn and this approach will - among a lot of other things - give you a basic feel for the types of melodies and harmonies that are used in your chosen genres. Once you have replicated a handful of tracks this way, you will be in a much better position to identify the areas where you need to improve. And as long as you know what a minor scale is and how triads work, I bet music theory will be pretty far down the list

I see a lot of people confused about what a chord progression is, and some even suggesting that there are no chords in their music.

Harmony and melody are really the same thing. You can say that you only do melody all you want but a person who knows a little bit about music would be able to tell you that you are indeed expressing a chord progression even if the chords themselves aren't there. Melodies combine to make harmony, but even if it's only one melody, observing the intervals of that melody over time can tell you a lot about the theme that the melody is tracing.

It doesn't matter what the musical style is, even in techno, a single bar melody can be 5 or 6 chords when you break it down.

The thing about a chord progression too though, is that it's no use to you unless you get how melody works - no point in knowing what Aminor is, if you don't know how to play a melody with Aminor.

What a chord progression really is, is an agreement between multiple musicians so that they can play together in harmony. Bringing the idea and understanding of a chord progression to your music can only be beneficial as you add more instruments but it certainly helps to know a few 'rules' of melody to really make it work.

Take this picture for example, you can clearly see that these are 5 independent melodies that aren't really paying that much attention to eachother on the surface of things. However, it was written in the same way that a band would structure their music. There is an agreement between the instruments of what is going to happen at a certain point and as long as you stick to that agreement everything will work out fine. You don't have to have a chord progression to have 'chord changes'. You can start a track with the premise of a chord progression without actually putting one in, or, like I did this one, you can start with a melody and being aware of the rules of melody, a chord progression becomes apparent to you based on your personal taste. 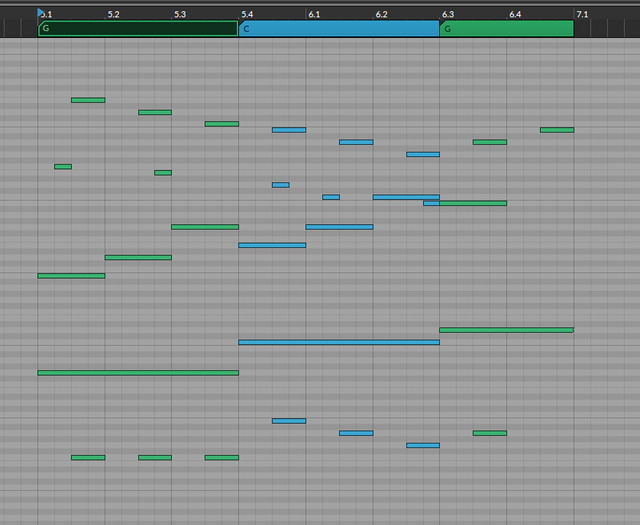 Music with a little of this understanding just sounds a lot more confident than music without it, but music is varied, techno is very rhythmical.

I'm a techno producer myself and before I got the hang of this stuff, my melodies would work together but not alone, or they would work alone but not together. Now, for better or worse, they all work together and/or alone.

Here is another. I've accidentally stumbled upon the hook for The Doors - This is the End. No matter, I'm not sure what chords they decided to go with, but I approached this with a mind to move from C to G, so even though it's only 4 notes and 1 instrument, to me, it's a C to G progression. 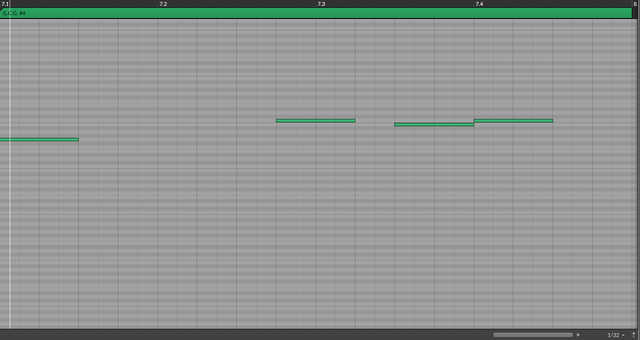 My crystal ball says this will not end well.
Cloud of Sound
Top

To begin with, breaking down tracks that you like section by section and making a note of what's going on musically will help with your arrangements. For example - "Intro - 16 bars - Kick, Bassline, Hi-hat" etc etc. Most DAWs have a marker tool where you can take notes of this, or you can even create "dummy" tracks in your DAW that match the reference track - and fill in the blanks later.

While this is essentially a copy-cat exercise for now, it'll make sure you get tracks finished and avoid folder upon folder of 16 bar loops that sit there gathering dust.

Once you've done a few tracks in this way you'll start to get your head around arrangements and you may no longer need a guide.

If you're making melodic music then yeah, a bit of music theory will help and some basic keyboard skills will help even more. A melody played badly at half speed can always be quantized and sped up.
http://www.facebook.com/andymcbainmusic
Top

Yeah, I don't agree that harmony and melody is the same. I have even seen questionable analyses of classical music excerpts in university level textbooks.
It is easy to overreduce something to supposedly simpler and more comprehensible structures, but sometimes your interpretation can be wrong.
Top

Yeah, I don't agree that harmony and melody is the same.

I don’t think anyone with even a rudimentary knowledge of Western theory would agree with that.
Top

What I'm actually saying is that the same language describes the behavior of both. Harmony and melody are what they are depending on how you use them but people can be put off learning theory because it appears to relate only to harmony. Harmony and melody are interdependent and even where there appears to be no harmony, harmony can be at work in the background holding the melody together.
Top

The same language does not describe both.

How does no harmony hold a melody together by working in the background? That makes no sense.
Top
123 posts