Roland Supersaw - any idea how the original was done?

synthpark wrote: ↑
Thu Apr 08, 2021 3:31 am
If you were right, TZFM would go out of tune when modulating a sine with a square wave which shifts it x Hz up and down (I know this isn't exactly the same). I would rather say the mean must be 0.

Pitch perception is logarithmic. In fact, when we talk about "pitch" as opposed to "frequency" it is usually understood that pitch is the logarithm of the "frequency. These coefficients are frequency multipliers, so their logarithms are the pitch offests (ie. they are not offsets in linear frequency). So the average in log-domain should be 0, which translates to geometric mean of 1.

ps. Whether the center of a set of detuned components is perceived exactly at the geometric mean is another thing, but it's certainly a better approximation than the arithmetic mean.
Preferred pronouns would be "it/it" because according to this country, I'm a piece of human trash.
Top

ps. Whether the center of a set of detuned components is perceived exactly at the geometric mean is another thing, but it's certainly a better approximation than the arithmetic mean.

Lets say it like that. Since the components are additive, not like FM, you are probably right, because when you use two detuned oscillators of equal level, you shift by cents equally up and down, in the logarithmic domain indeed. And more are just an extension. The geometric mean is about 3.5 cents apart from center, but due to the strong detuning effect negligible. That means I could actually undo my "correction". How I came to this: exponential FM detunes as you increase the modulator frequency, because the modulation happens too fast for the ear and the mean pitch is not perceived as the integral in the logarithm domain, but rather in the linear domain.
Top

it has some more information how they're intended to be used

what perhaps isn't very clear is how i got them
i used a wav file with the supersaw oscillator (assuming the detune parameter was set to max)
i panned this wav file to the left, and played it in a loop (a long enough one so that the poor loop doesn't matter)
then, in SynthEdit i added 7 sawtooths with some math and sliders, panned all that to the right
i used my realtime spectrograph then to watch what's going on and tuned my sawtooths until they visually match the ones on the left channel as close as possible

i don't have a screenshot from then, but here's how the spectrograph looks like otherwise: 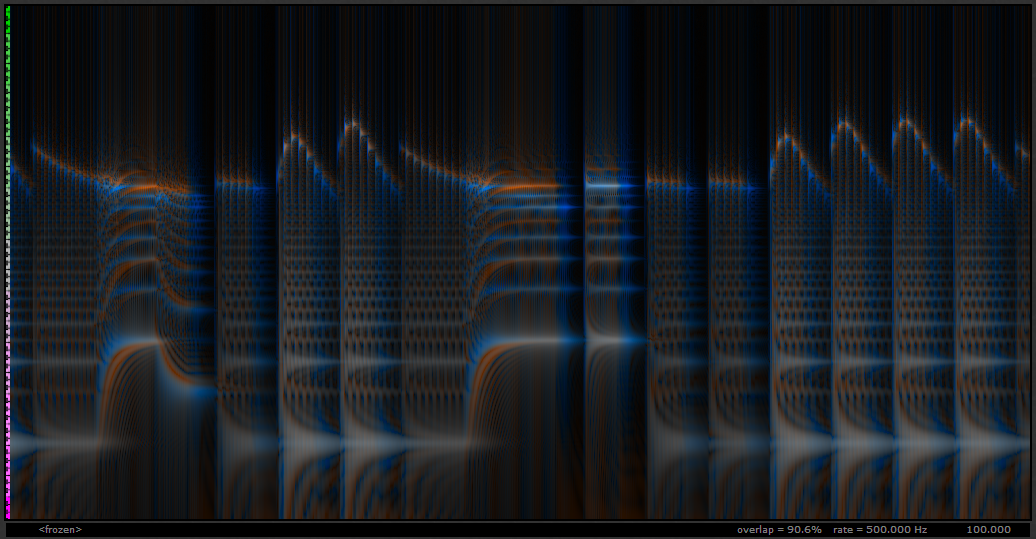 it's made of bandpass filters and the distribution can be linear or log, and i can zoom-in additionally (on this picture there's no zoom, you see the whole range)

as for whether some sawtooths in the supersaw are inverted - no, all sawtooths are with the same polarity, you can see their "reset" transient all going in the same direction and you can even count that they are 7
It doesn't matter how it sounds..
..as long as it has BASS and it's LOUD!
irc.freenode.net >>> #kvr
Top

plugin for KORG synthesizers is arguably the closest sounding emulation of the SuperSaw. The website gives a detailed explanation of the synthesis process: https://edouard.digital/jp-booo/
Top
154 posts

Return to “DSP and Plug-in Development”