... possibly coming in at 449 euro ... if leaked/current details are to be believed 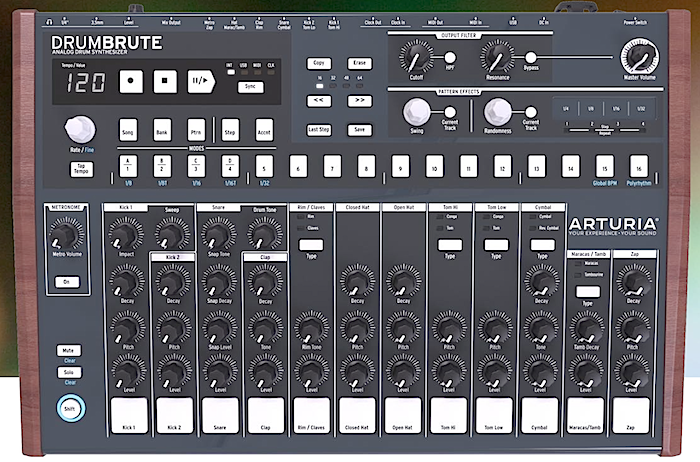 From the webcached online retailer:

Taking roots on the long-standing history of classic drum machines it builds on the look and sound of the ‘Brute’ franchise. DrumBrute offers seventeen true analog sounds, unique performance effects, modern step sequencer, ease of use, and great connectivity.

For the last five years we’ve constantly been asking the dealers which product they expected from Arturia. The very most frequent answer has always been: “an analog drum machine”. They asked, we listened: a new analog classic is born! We hope you’re as excited as we are!
MAIN FEATURES

Modern indie-rock hipster for the sound, the ease of use, the great design and the analog character that DrumBrute offers.
Dance music producers / DJs are looking for a drum machine that will move a dance floor. They’ll love the two kicks and the large array of performance oriented features.
Hip-Hop artists, and especially beatmakers looking to get some heavy hip-hop analog flavor. DrumBrute’s versatility perfectly delivers the sounds this key target group is looking for.
Electronic musicians in their 50s who are into Tangerine Dream, Jean Michel Jarre, Kraftwerk. They need more than just a snare and kick: fortunately DrumBrute has seventeen instruments and it will even clock to their vintage set-up!

> SOUND
The sound of DrumBrute is based on the best of the best classic analog drum sounds. Sound profiles were created from the past but then the circuits were designed to build up DrumBrute’s own sound signature.
Two styles of kick drums, wide ranging snare and clap setting, two hi hats with tone and separate decay times, reverse cymbal, zap and more. DrumBrute offers a wider sound palette than any other analog drum machine bellow 1500€/$.

> EXPERIENCE
DrumBrute is designed to give musicians the same great hands-on experience they get from our other award winning Brute instruments. All sound parameters can be changed instantly and set with the nice intuitive interface. DrumBrute is truly easy to use! No need to read the manual!

> PERFORMANCE
DrumBrute is not only about creating a beat: it’s also about tweaking it and making it evolve in real time! DrumBrute adds loads of innovative features like our Step Repeat, Pattern Looper, Mute/Solo groups, song mode, Randomness and Swing functions per track. Finger drummers will love the ability to play quantised or semiquantised on ultra sensitive pads.

> CONNECTIVITY
DrumBrute is the only analog drum machine in its price category to offer as much as 12 separate audio outputs! DrumBrute is a swiss army knife for syncing your gear. It will basically sync with any set up: Eurorack, vintage Roland gears, Korg Volca, DAW, MIDI devices…

google translation of above article:

Arturia affects dry and tough presenting the new analog drum machine to a "boutique hotel" (who wants to will understand, understand ...). The device during, shown in great secrecy last MusikMesse and finally freed from the embargo that prevented the disclosure, takes the best from classic analog architectures of the last century - thus organization sequencer and tone generation - temperandolo with interesting realizations previously made arrangements in that of Grenoble, then filter Steiner, intervention Swing / Random global or per track, Roller / Looper.

In addition, DrumBrute is one of the few rhythmic units currently in production to allow the heavy polyrhythms through independent sizing for each track / instrument.

The main features are particularly greedy:

Seventeen analog timbre kick comprising 1, 2 kick, snare, clap, hihat open, close hihat, congas hi, the conga, hi tom, tom him, maracas, rim shot, claves, tambourine, cymbal, cymbal reverse, zap.
Endowment of independent dedicated controls for each instrument; there is always a volume, there is always the Mute / Solo option, in addition, there are the timbre characterization parameters (all residents and simultaneously accessible on the control panel, as the good old days ...).
Sequencer arranged in 64 patterns; each pattern can have a maximum length of 64 steps; Each instrument track can have an independent life from the other, allowing the construction of intricate polyrhythmic structures.
Repeat step prepared for the fast creation of Ratcheting effects and rebound.
Song Mode for concatenation of previously programmed sequence pattern.
Each pattern can be influenced in real time with the Swing behavior and Randomness already tested in BeatStep Pro; the two behaviors are applied globally to all that programmed in the pattern or may only be focused on the current track / edit tool.
Looper pattern to repeat batting of segments equal to the fourth, eighth, sixteenth, thirty-second, all in the finger tip.
Steiner Parker pass protection filter, with low and high pass mode, with Cutoff and Reonance controls.
Twelve individual audio outputs on standard ¼ "jack (many greetings to many competitive machines). Main Mono output, always on standard ¼ jack format. " headphone outputs with independent volume and connections parallelate double TRS ¼ "TRS format and ⅛".
Bidirectional management of four possible clock: Internal Clock, MIDI Clock, USB Clock, Analog TTL Sync.

The sound is based on the best circuits in the analog tradition of the last century, revisited to enhance its unique characteristics and offer instant access to the most significant parameters. Two different styles of kick drum, simultaneously available and usable, with independent parameter kits, snare and clap wide-ranging action, hi hat opened and closed completely independent in volume and decay time, cymbal straight and reverse (made analogously) zap.

The presence of dedicated playing pad allows not only the Real Time Programming (coupled to the classic data entry Step Mode on multiple sixteenth note grid), but also the direct execution at your fingertips timbre of residents; the whole thing is powered by Step Repeat, Pattern Mooper, Mute / Solo with ability to create assignment groups, song mode, Randomness and Swing. These last two parameters can be independent per track. The playing of the pad sensitivity facilitates the real-time execution, the presence of a sophisticated internal quantization engine facilitates the rhythmic alignment in programming.

Connectivity is extreme: in this price category - more information later - DrumBrute is the only analog drum machine to offer twelve separate audio outputs. In addition, there are the two MIDI In and Out, the Type B USB port, the two connections Sync In / Out format TRS ⅛ ", the main outputs monaural output of ¼", the two stereo headphone outputs ⅛ " and ¼ ".

A look at the competitors

The street price of Arturia DrumBrute is 449 euro.

And 'inelegant, but we see quickly which are the main competitors of the new Arturia drum.

Akai Tom Cat. Costa 219 €, has six resident sounds, with a minimalist set of editable parameters. And 'certainly suitable for an audience that is taking its first steps in the industry and who does not want to invest too much.
KORG Volca Beats. Costa 159 €, offers a choice of timbre deliberately low profile, has extremely limited connectivity (network, there are different designs for aftermarket modding the device), is an irresistible gadgets.
Roland TR-09. It costs 449 euro. The last entry in the Boutique Series. All-digital, has a very 80's workflow, does not have pad dynamics, given the size, it just swing on realtime performance. It has no separate analog outputs, offers differentiated connectivity - four buses - on the USB socket.
Roland TR-8. What 499 euro. Fully digital, does not manage the clock sync, does not have analog connectivity dedicabile, offers separate connections to USB format, can load modeling of historical Roland drum machines. Its design has always been the subject of several statements.
DSI Tempest. It costs 1999 euro. Almost all analog, manages digital samples; Pairs an important purchase price with a demanding parameters for the user kit. Only recently has it been the subject of an upgrade that has solved historical malfunction.

Arturia DrumBrute paves on the control panel all the parameters related to the real-time management of the available analog sounds:

The operation of DrumBrute is divided into three levels of programming Song, and Pattern Bank. The sixteen addressable grope work so as numeric key readers because as selectors for the four AD benches; in addition, you can define the Global BPM with direct entry Rate / End and comparison on the three-digit alphanumeric display. And a tap tempo engine 'available.

The metronome, which has a dedicated output audio is adjustable on / off and volume.

The scale programming and the quantization is done for the second round, for triplet eighths to sixteenths, triplets to sixteenths, for thirty-seconds; you can define the Last Step useful pattern, moving - as in BeatStep Pro - through the four possible pages 16-32-48-64 step, with firm or updated dynamically display during programming; the groping and the steps work in color code with variable back lighting. Triggering Polyrhythm way, every programming line / instrument can have the length / number of steps it considers necessary; in this way, 16 starboard checkout steps can be overlapped to 7 steps of maracas and step 11 of the tom ...

The seventeen analog content in DrumBrute sounds are quickly adjustable, during the performance, for example, with the Mute and Solo behaviors; you can create allocation groups to open and close quickly more than one instrument at a time. Jeff Mills could start to feel hot ...

The reading of the pattern and / or individual tracks / instrument that compose it can be modified in real time by the two algorithms have already been tested in BeatStep Pro Swing and Randomness; They apply globally to all instruments playing or the Current Track selected. Looper offers a touch-sensitive surface with which to define the unconditional repetition batting quarters, eighths, sixteenths or thirty-seconds of pattern programming.

audio on Main, is the Output Filter module technology Steiner Parker to process low-pass / high-pass the entire audio stream; commands include Cutoff, Mode, Resonance and Bypass; we do not know if there is provided a envelope follower mechanism to automate the movement of the cutoff frequency.

At least it wouldn't surprise me if Arturia released something like that.

Plugins and a DAW. On an operating system. Which runs on a computer.
Top

masterhiggins
KVRAF
2663 posts since 31 Dec, 2004 from People's Republic of Minnesota

Looks awesome. I do wish they released a newer version of their larger spark controller. That thing had some serious performance capabilities and a shit-ton of knobs.
Top

All that for the same price as the TR-09.

I guess we'll have to hear how it sounds.

That bit about having a wider sonic palette than anything else under 1499 euro
Analog Rytm is €1,479 and is incredibly versatile.
Top

This looks good. Love the minibrute, looking fwd to the maxibrute. Now this

This one proves Brute line is not very attractive visually

Other than that, looks like another clone of 808/909.
http://djwarmonger.wordpress.com/
Tricky-Loops wrote: (...)someone like Armin van Buuren who claims to make a track in half an hour and all his songs sound somewhat boring(...)
Top

wow. That's no Rytm wolf, that sounds like the real deal.

I went from totally excited to not interested once I read the manual. No control over any sound generating parameters through midi.
I believe every thread should devolve into character attacks and witch-burning. It really helps the discussion.
Top

ericj23 wrote:I went from totally excited to not interested once I read the manual. No control over any sound generating parameters through midi.

Analog purism aside, what do you expect for 449 euro ? Something's got to give, and I definitely think they made the right choice. I hope it's a roaring success, and if so I suspect they will come up with a 'MaxiDrum' at some point that will have more in common with the more sophisticated drum machines like the Tempest and Elektron's etc (i.e. parameter sequencing, preset storage, etc) to satisfy those who want 21st century comforts in their drum machines.
Top
52 posts