Hello everybody ! I thought it would be the good time to create a thread for my KVR DC 16 entry. It is called Spaceship Delay. In fact, I came up with the idea of Spaceship Delay a long time ago already, I just decided to give it a go for the KVR DC 16 when I saw that KVR organized again a contest this year. The thing is I have all the Korg Monotron little synths at home, and even if I don't use that much, I love the idea behind, and more specifically I love this one :

https://www.youtube.com/watch?v=CNXOI1AIjKo
So I was thinking : what if you could use it as an effect ? And what about designing a convenient plug-in to do so ? A few hours later, I was coding a simple Korg MS-20 filter simulation, and I put it into a delay line. And it sounded already really amazing ! Then, 3-4 weeks ago, I started coding a plug-in using that simulation as a basis, and the all the important things that we would want in a good delay plug-in. I had also the chance to rent another amazing device, called the Dynacord Echocord Super 76, which is a tape delay machine with a spring reverb, more focused than a Roland Space Echo, but which sounds really good too. Now I don't have it anymore, but I have studied it for a few weeks, and I had captured some impulse responses from it. So, I decided also to include a simulation of that spring reverb thanks to convolution also, and I am very happy with the results. And I gave a go to the modeling of a synthesizer Twin-T filter you might know as well.

Then, I did some digging about all the things that people like in delay plug-ins, and about the associated technology. I worked on a prototype which allows me to use different kinds of delay lines, using various strategies for fractional delay (linear+cubic interpolation, artefact-free implementations of time-varying allpass IIR filters), and delay changes (with or without pitch changes). I tried to put various audio effects in the delay line path, and kept only what sounded the best. I added also extra filters on post processing and a phaser, and the attack mode I loved from the Guitar Gadgets delay. I also saw that video which made me want add a freeze button and increase a little the maximum delay value.

https://www.youtube.com/watch?v=LhkXNCmctHw
I had also a very good idea for the user interface, which is why I called my plug-in "Spaceship Delay", but... unfortunately I underestimated a lot the amount of time necessary to make it a reality, so with a lot of frustration, I had to keep using the prototype user interface for the KVR DC 16 plug-in itself as well. However, I plan to update the UI when the contest is done ! And I got that idea of putting a manual / tutorial embedded in a plug-in for a long time, from the moment I saw that feature in Ableton Live. I was thinking about putting it in Guitar Gadgets 2 years ago but I didn't have enough time. For the KVR DC 16, I did succeed, and I'm happy with the result there too. Designing something like that for my recent JUCE Summit / ADC talks might have helped too. 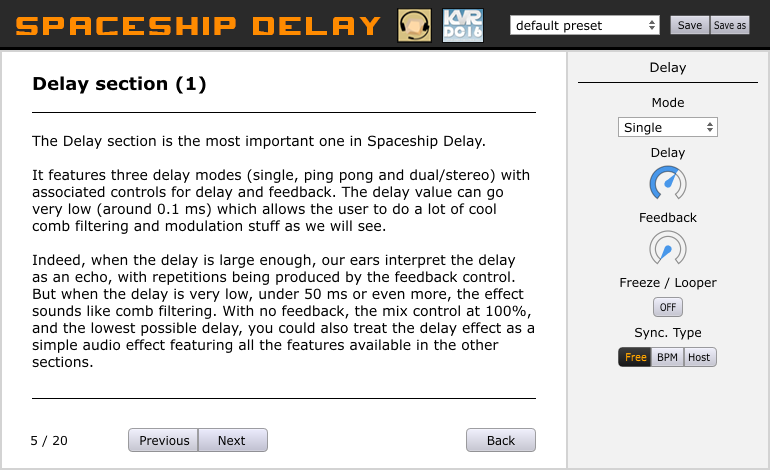 I'm very happy to do that contest again and I hope I will "perform" better than last times but still, I know I will learn a lot of things again !
Musical Entropy | Blog | On Facebook | On Twitter
Top

Thank you! It's a fun plugin!
sketches... http://soundcloud.com/onesnzeros
some artists i support... https://bandcamp.com/spectraselecta
Top

This is actually my favorite contender in this years Dev Challenge. Great sounding and well featured/versatile delay plugin against low cpu usage, I love it.

Your Guitar Gadgets plugin from the Dev Challenge 2014 also gets much use here. Man, you are a talented developer for sure.. and I thank you a lot for your work and releasing it for free!

No band limits, aliasing is the noise of freedom!
Top

Thanks a lot guys !

I started a thread about it over at the DC Chat forum - here's what I wrote:


Weird - not properly functioning, it seems - installation method - keeps telling me to install
the files even though the sub-folder is there in exactly the folder the plugin itself points to when pressing the respective button on the GUI

I've sent you a PM

I think it's probably a easy to solve issue.

I have asked around if some users would prefer an installer, and some of them replied they prefer the zip file... I think I should just do both to give the choice.
Musical Entropy | Blog | On Facebook | On Twitter
Top

Personally I prefer installers... my problem was that the program I used to open the zip (IZArc) only copied empty folders - and with an installer this would not have happened. The job of installers is to make life easier, not to bewitch our computers.


With that being said:

Marvellous plugin - very versatile, great sounding, super-easy to use - what's not to like?

Okay... I wish the spring reverb used less CPU-cycles. But boy... it DOES sound good.

(btw: I'm typing this about one meter away from an Echocord Super 76)
http://handmademusic.ch
Top

Like I said before, I think it would be better to give the option, so I'll do an installer soon when I got the AAX version working

Thanks a lot for the nice comments

I'll probably have a look again at some point to non uniform partitioned convolution algorithms theory. I didn't do so before because the number of troll patents for having low CPU convolution with long impulse responses is scary

By the way, the Super 76 I had some months ago was really awesome, and I did a lot of measurement on it, I would love to do a full and fair emulation of it at some point.
Musical Entropy | Blog | On Facebook | On Twitter
Top

Hallo Ivan,
I love this plugin ! You have my vote !

I have a question.

The Mix knob works in a different way as usual ?
When I turn to the left I should hear only the dry signal or not ?
But I hear the spring and also the effects section ( Phaser , Filter ) when turned to left.
My Recording Studio http://www.echopark.at
Top

Yes, and isn't that great?

The plugin would be A LOT LESS flexible if the dry/wet control would work the way you expected it to work. It's A LOT MORE than "just" a delay.

I know, you can't imagine how many times I changed the location of the effects of the post effects in the processing chain

I agree, it's logical that a big control called "Mix" acts on ALL the things that can change the colour of the effect. So, following the logic of things, at first the dry signal controlled with the mix knob could never be processed by the Spring Reverb or any of the Post FX. But then, I thought that it was really bad to have all the time some initial delay applied to the reverb, so I put it after the place where the Mix control behaves. Then, I thought it would be logical to do the same with all the post FX. But now, the mix control has a behaviour which is not right anymore

Moreover, I think the actual state of things is really wrong for the post filters, because for me it is more useful to use them on the delayed signal only, otherwise I would just use an EQ plug-in after to do the same thing.

So should I move the location of the post filters only, and let the phaser where it is ? Should I move again everything but the Spring before the Mix Processing ? Or should I provide a switch to select what option you want to use ? I don't know yet, I need to think about it a little more

Switches would make it even more flexible, so I'm all for it.
http://handmademusic.ch
Top

Yep, this is a top contender for sure!

I just noticed everything is tweakable while the loop is running, tweaking time, adding FX etc... I've been just playing with this linked to MIDI controller (you'll want to link the looper button too!), very inspiring. It never sounds bad, no glitches, and made me want to explore looping, just awesome <3
Soundcloud
Top

A gui like Echocord would be soo coool...
Top
170 posts