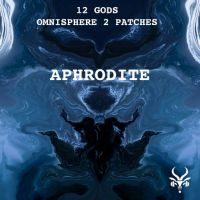 12 Gods: Aphrodite is a 50 patches library for Omnisphere and 4th volume of "12 Gods" series. It is inspired by the Goddess of Beauty. Its sounds are focused on airy and beautiful soundscapes to recreate the beautiful nature of Aphrodite in a sonic dimension but also there are some fuller and darker patches that mirror the dark side of the Goddess as very often mentioned on Greek Mythology.

MW is used for a subtle vibrato while AT is attached to Pitch variation.

Presets were designed with Omnisphere 2.8 or and run best with this or newer version.