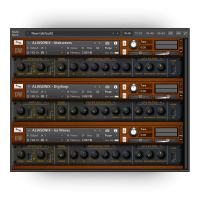 Most should realize by now that I have a fascination for rediscovering old technologies and combining the best of them in a constant attempt to create something new and unusual. Some of you will also know that I'm a big fan of the retro computing scene and especially the demo music scene that grew up around it during the mid '80s and into the '90s.

Almost all of the time my technological foraging involves trawling up some physical lump of hardware but on recently rekindling my love of ProTracker on the Amiga I got curious one day and wondered if perhaps someone had attempted to not just play back samples as in Karsten Obarski's pioneering Ultimate Soundtracker (that came close to bringing Fairlight Series II functionality to the unwashed masses on two floppy disks in 1987!) but rather to synthesize them from scratch...

This product is compatible with Kontakt Full V4.2.4 or later (Not for Kontakt Player)

But what about combining technologies old and new? Feeding the raw aliased nature of the original 8-bit waveforms into smooth filters in a modern synth engine results in something more similar in nature to early digital/analog hybrid instruments such as the PPG Wave, µWave I and Mirage.

So what does it sound like? Having finally tracked down a working copy of this relatively rare software my expectations were not that high but to my surprise what transpired was so primitive in nature that it imparted significant character in its gloriously aliased 8-bit audio. The filters really worked but in an odd way, the dynamics control and phaser effects full of steppy artefacts and most excitingly of all – it sampled beautifully rendering two octaves of MC68000 generated goodness.

I ended up programming up some 40 or so patches and set about capturing 630 samples in 24-bits directly from the line outputs of a recently acquired Amiga A1200.

It must be noted that Aliasonix is entirely based on waveforms captured from a low sample rate 8-bit source and therefore noise, glitches, stepping and aliasing are very much part of the intended charm and character of this library.

What I was expecting to find was some sort of crude utility that took some basic settings and then went off and slowly processed a few waveforms to load into a sampler.

To my amazement what I actually found was a relatively unknown program called Aegis Sonix released circa 1989 that managed to implement a full 4 voice subtractive soft synthesizer with a digitally modeled low pass filter and realtime dynamics control running purely in software.. on a 30 year old Amiga 500.

This predates even Dave Smith's first soft synth for the PC by several years and surely must be one of the earliest ever examples of a purely software based real time subtractive synthesizer running on a home computer. It even has some pretty nifty features such as hand drawn oscillator waveforms and LFOs and a cool feature to add 2nd and 3rd order harmonics to any waveform.