Aureus Ventus for HALion 5 My KVR 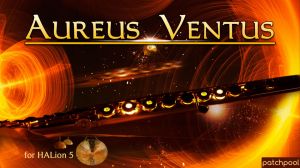 The flute sounds for this library are created by using a special playing technique named Pars- Pro-Toto, invented by German flautist Andreas Mazur who also performed the samples used in Aureus Ventus. He found a method to create beautiful and expressive flute sounds by playing on the single parts of a conventional flute using special fingerings and embouchure techniques. This yields sounds somewhere in between a shakuhachi, an okarina, a viola and a voice, hard to describe in words really...

Multi-sampled bass flute instruments, some vocal and string sounds and tempo-synced percussion loops are also included in this library.

In addition to the above a wealth of electronic derivatives create a counterpoint to the acoustic sound worlds. Tonal soundscapes, ethereal tinkles, warm and ominous drones, minimal sequences, lush pads and other fascinating textures created with programs like Kaleidoscope, crusherX, Metasynth, GRM Tools, Serum and Zynaptiq's Morph are layered with the acoustic sounds to create expressive instruments.

Many of the patches make use of HALion's exceptional granular engine, it's deep sample player and the synth engine, often layering or splitting different synthesis forms in one patch with key- switchable articulations or sound-combinations and round robin alternations.

You can view/download the PDF for Aureus Ventus with more details, the licence agreement and the patch list including playing tips and detailed descriptions for each patch here.

All of the 108 presets have the 8 Quick Controls and the Modulation Wheel assigned, many also use Aftertouch and/or HALion's Sphere-modulator, some make use of the FlexPhraser and Trigger Pads.

Please note: the full version of HALion 5 or 6 is required to play the patches from this library.

All audio demos were produced entirely with HALion 5 using only patches from Aureus Ventus, no post-processing was applied apart from a limiter on the outputs and some volume automation, if several instances of HALion were used in a track.

All videos for this library can be found in {See video at top of page}.

Customers who like Aureus Ventus for HALion 5 also viewed...