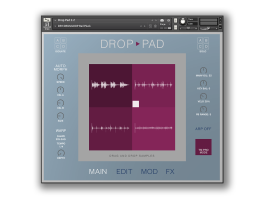 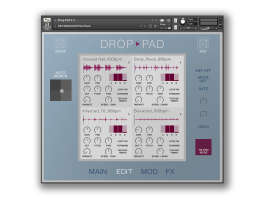 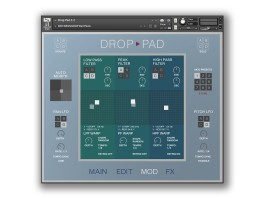 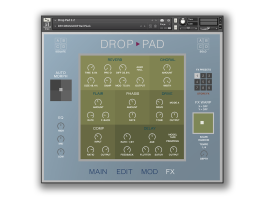 Drop Pad's XY-Morph movements can be recorded and exported and imported to or from disk, all four samples can be edited and modulated by the onboard Filters and LFOs. Seven of the best Kontakt effects and an optional Arp will give the sound the final touch - and all samples and almost every movement or modulation can be instantly tempo-synced.

Additional features include a Play button (accessible from all windows) for auditioning loops and it is now possible to further modulate the path of the morph cursor using further Warp functions, which open up new possibilities for modifying textures. An Isolate function now allows one or more of the pads to be locked so that its playback level remains constant, for example, when you want your Pads and Cinematic Soundscapes to remain steady but still have the Sound Effects and Arps assigned to other pads following the Morph path.

Modulation and FX setups can be stored and recalled with just a click or via automation.

The Modulation section contains a low-pass filter, a peak filter and a high-pass filter, each to be assigned to one or more of the four sample pads where it is possible to modulate the filter setting via a choice of LFO shapes allowing both the X and Y parameters of each pad's cursor to be changed during playback — independently for all three filters. Other modulation features include independent Pan and Pitch, both with a choice of waveforms.

The FX section contains seven global effects: Reverb, Choral (Chorus), Flair (Flanger), Phasis (Phaser), Overdrive (Van51), Compression (Supercharger GT) and Replika Delay. A special FX Warp pad allows the X and Y axes each to be assigned to an FX parameter where the rate, modulation shape and tempo-related speed of the FX modulation can be adjusted.

A simple EQ allows further shaping of the sound. Complete FX setups (all FX and EQ settings) can be quickly stored and recalled with via the 9 FX preset buttons.

In addition Drop Pad comes with a 860MB library of high quality on-board Snapshots and Samples featuring Cinematic Soundscapes, Bass and Drum Loops, Pads, Raw Textures, Sound Effects and Arps. Users can easily choose different sample combinations of the Factory content to create their own Snapshots as well as bringing in their own samples.

"In summary, Drop Pad enables the user to experiment with some seriously exotic sound shaping using straightforward controls...This is one of the occasions where the end result appears to be rather more than the sum of its parts."