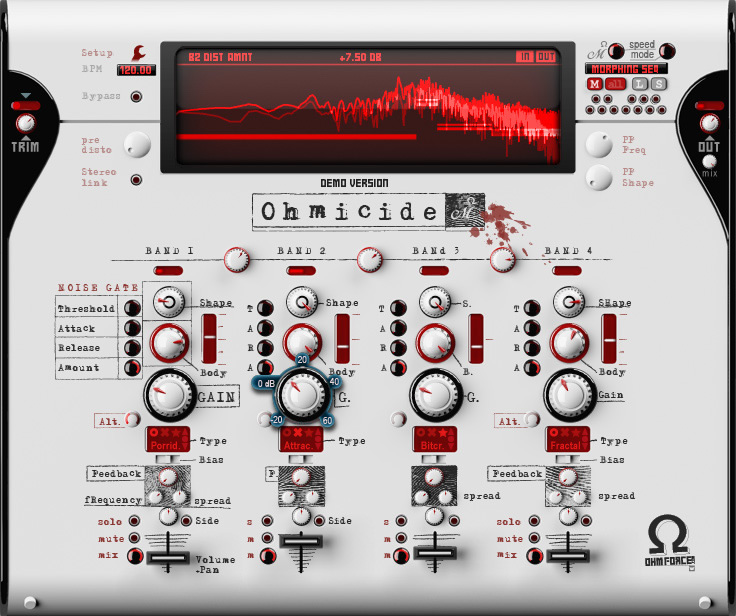 What is it?
Distortion / Overdrive / AmpDynamics (Compressor / Limiter)GateOhm ForceOhmicideMelohman
Format(s)
Operating System Availability
License & Installation Method
Voucher / Code for redemption on other website
What does this mean?
For related news items, downloads and more please see the full KVR product page for
Ohmicide:Melohman

Based on Predatohm's design, Ohmicide:Melohman is organized around up to four frequency bands, each of them coming with their own Noise Gate, Dynamic, Distortion, Feedback Generator and all mixing abilities with just a twist of pre- and post-processing (distort input, high shelf output...).

The DSP is 100% different from Predatohm: the compressor/expander works differently to fit well with both the very sharp Noise Gate and the huge amount of new distortions. Those are at the core of Ohmicide. They're designed to offer pretty much everything you can think of next to a lot of things you can't. Some, like the tasty "Porridge" distortion sounds deliciously analog, while the "Fractal" one is harsh and digital as hell. Or you've got the very dense "Accumulator" that can add low harmonics instead of high.

All of these distortions are mainly new breeds - yet the classics are also covered. They all are declined (?) in three variations: normal, ampsim and odd. The "Odd" one gives you control over the harmonics frequency and allows for slightly detuned distortion. Last but not least, Ohm Force has added a disto type that was missing from Predatohm... No distortion. It was an absolute need, considering how many things can be done just by using the multiband dynamics.

Predatohm addicts will be happy to know that not only does Ohmicide:Melohman include a feedback generator on each band, but that it can be spread in stereo.

Already known to Symptohm:Melohman and Minimonsta:Melohman users, Melohman is a set of features dedicated to live action. It allows you to morph between presets or randomize the sound in an intuitive, organic way. Just plug a MIDI keyboard in to your computer and play notes to go from one sound to another at a velocity sensitive speed.

For the first time it is included on an effect. Testing shows good results for anything that involves live mix/remix as well as being efficient in a production situation. Also used in a MIDI pattern logic it's a very powerful tool for loop manglers.

Ohmicide:Melohman launches a brand new design line for Ohm Force products. Only one skin. However they may deliver variations in the future.

Things to know about the interface:

For the kind of music I find myself making now, distortion is a crucial element. It has to be dirty in a clean way if you know what I mean -- it has to be controllable. And to be worth buying, it has to be versatile and powerful.

Ohmicide is all those things.

It's more than distortion. It doesn't *have* to be radical and demonic; you can simply use it as a sort of four-band EQ if you like, or as a multiband noise gate and/or dynamics processor. Or you can use it to warm things up a little bit. Or you can melt faces.

UI: A few minor nitpicks. Some of the controls feel a little small to me (particularly the mode selector scrollbar/buttons). The popups on some knobs seem to get in the way, necessitating occasional extra mouse clicks to get rid of them. The dialog box for loading a preset bank is a bit annoying since it doesn't remember where your presets are stored.

The Melohman technology is a bit confusing at first, and chances are if you don't skim the manual before messing around, you WILL lose some of your tweaks. But once you've figured it out you'll see that it's quite a powerful feature.

SOUND: I've never owned distortion hardware that cost more than $15, so comparing it to boutique stomp boxes or overdriven tube amps isn't something I can do. However, it definitely is capable of distorting your sound in musically useful ways. Also some very ugly, harsh ways when that's what you need. Or howling feedback from multiple channels that beautifully interact. :) It's not an amp/cabinet sim, but it doesn't need to be.

FEATURES: Extremely versatile; does distortion well and more besides that. The one feature I could think of to ask for would be individual post-distortion filter or EQ for each band; however you can usually get all the control you need without that anyway.

DOCUMENTATION: Website-based, so you need to be online to read it. Clear and well written, though my browser had a problem rendering the description of the various distortion algorithms.

PRESETS: There are lots of them. I'm not sure they can be judged as "good" or "bad" because it really varies with the source material and what kind of sound you're looking for. I don't find them particularly useful; even when evaluating the demo I didn't fall in love until I tweaked it myself for a while. I almost always start with a blank preset and cook up what I need from there.

CUSTOMER SUPPORT: The only downside I can think of here is unwillingness to allow license transfers -- but I know I will never want to sell mine anyway. :)

VFM: Strong. The 79 Euro pricetag was a little scary to me at first, but this is absolutely the most satisfying plugin purchase I've ever made. Well worth it.

STABILITY: In some projects it works beautifully with no trouble at all. In another couple of projects it tended to crash FLStudio after tweaking a newly added instance. Other plugins have given me similar trouble, so I always save before I add new plugins to a track anyway.

Overall I'd give this plugin 9.9 out of 10.Read Review