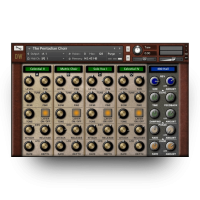 A selection of twelve unique synthetic choirs made up of 215 hand crafted vocal formants.

At least 50% of the samples in this collection were created using little more than a handful of discrete circuits and vintage lab gear all processed with vintage classic analog and tube technology and brought together in the same proven 4-voice layering engine as the Orbitone library....

Well over 100 samples were painstakingly captured by hand configuring the equipment for each note and then sampling the results. The samples were further EQ'd and loaded into multi-samples.

Some of multi-samples were further processed with an analog chorus unit.

The Celestial Choirs featured in The Pentodian Choir started off life as little more than a series of short pulses created by an old hand-configured analog lab signal generator. The frequency of the pulse train was gently modulated using the swept oscillator function to act as a vibrato.

The pulses were converted into exponential ramps using a passive wave shaper circuit similar to those found in early string synths and the resulting sawtooth fed into a Triple Passive L/C Resonator circuit based on the 1938 Novachord formant resonator section. This is little more than three coils of wire and three capacitors.

The resulting waveform was then impedance buffered using the entire vertical signal path of a 1968 Tektronix 545B tube oscilloscope! The output from the vertical signal output socket was then fed into a prototype tube overdrive unit and into a tube equaliser.

Two of the choirs were created by feeding the brass organ stop from a 1972 Eminent 310U into a rehoused 1978 Polymoog Resonator Section. This proved remarkably effective and a similarly successful choir was made by feeding a string patch from a Matrix 1000 into the resonator. A third choir was the result of recording the previous results hot onto a 1967 Revox G36 tube tape machine and resampling.

A curious solo vocal effect was created using a prototype concept consisting of a triode based relaxation oscillator feeding a passive L/C resonator passed into a tube band pass filter modulated by the same LFO as the pitch vibrato.

Customers who like The Pentodian Resonator Choir also viewed...