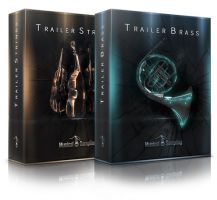 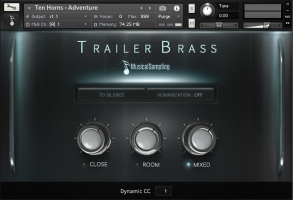 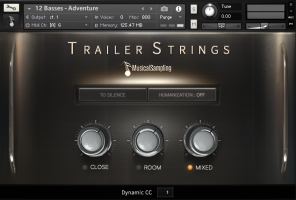 This collection, comprised of a 60-string ensemble and 26-brass ensemble was specifically designed with trailer music composers in mind. Both libraries were produced with the same wide-seating aesthetic in the same large concert hall and both follow the same mantra: huge, LOUD, AGGRESSIVE.

With some of the loudest performances ever captured, Trailer Brass includes three separate sections: 10 horns, 10 trombones and an aggressively-processed, six-piece cimbasso/tuba ensemble. We've also included an arsenal of custom sound design patches that were sourced from the recordings.

Trailer Strings comes in four separate sections: 18 violins, 16 violas, 14 cellos and 12 basses. In addition to the inspired FFF dynamic, we've captured all the articulations down to piano, making this library a surprisingly useful asset for softer musical contexts. We've also included an All Strings patch: a time-saving full strings ensemble as well as an inspiring time-suck.

What you get is a useful array of short and long articulations, but with a size and clarity that's specifically geared towards hugantic (hugh-jan-tik), over-the-top productions. As with the brass, we really pushed the players to give us everything they had with the triple-forte dynamic. After a series of unrelenting requests demanding "MORE!" volume, the players really sailed through with inspired, bow hair-snapping performances.

What you may not expect with this release is that the dynamic range is quite wide. In addition to the fortississimo dynamic, we went all the way down to piano. Feathery spiccatos, pillowy staccatos and smooth marcatos performed a la dolce. Tasty.

And the sustains? Six dynamics deep. The softest two performed sul tasto (over the fingerboard) to get that whispered, feathery tone.

We've also included our "Adventure" patch programming for all four sections, a cool asset for on-the-fly, pompous string lines. Seriously, load up the basses/cellos Adventure patches, set the basses an octave down, arm both tracks and get your pomposity on. See? You're smiling.

Also included in the basses and cellos are three cluster effects patches. "Snap and Grunt" provides an arsenal of atonal snap pizzicatos, spiccatos/staccato chugs and behind-the-bridge scrapes. "The Brooding" includes subtle, low-range aleatoric meanderings (good for: "alligator sneaking up on prey"). "Behind the Bridge!" is exactly that, tremelo'd (good for: "alligator eats prey").

Our favorite part? The "All Strings" patch, which includes all the respective articulations, spread out over the keyboard. Be prepared to waste a lot of time playing with this patch:

We recorded three different groups: a ten-horn ensemble, a ten-trombone ensemble and the Horde; a three-cimbasso/three-tuba ensemble that has been aggressively processed for maximum beefiness.

To get the wide, wall-of-brass sound we were looking for, we sat the players evenly across the stage of a huge concert hall. We also spent a lot of time going for maximum volume, which is no easy task. It got so loud in there that the trombones ended up busting one of the microphones. Congrats were issued.

We've also included a varied collection of sound design patches that utilize the brass recordings in some great ways. Impacts, pads, BRAAAMs, synth basses, rhythmic drones and the like.

As always, we made it a point to limit the controls needed to get the job done in a reasonable amount of time. The Adventure and Majestic patches come to mind, where you can produce believable brass lines using just your keys and the modwheel. The library also contains five different GUI's designed to immediately inform you of what a particular patch can do in terms of control: