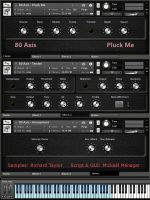 Richard Taylor sampled many analog synths and released the results into the Public Domain. bigcat instruments has started turning them into Kontakt instruments.

Thanks to scripts and GUI from Mickaël Ménager, each synth will feature effects such as distortion and compression along with built in amp simulation.

The first Taylor sampled synth, the Axis 80 has just been released. It has over 2500 samples and weighs in at a touch under 2 gigs compressed.