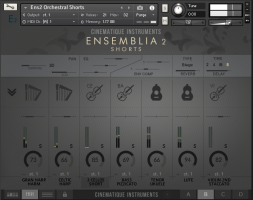 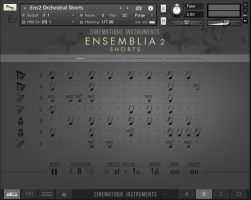 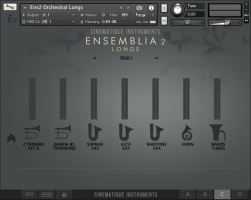 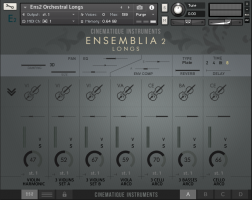 Cinematique Instruments has announced the release of Ensemblia 2 Orchestral for Kontakt.

Ensemblia Orchestral is the sound of a modern chamber orchestra. It sounds warm, intimate and organic - and always different, since you can instantly put together your own ensemble from over 50 instruments.

The core of Ensemblia are seven separate instrument tracks that can be freely assigned from a large arsenal of orchestral and non-orchestral instruments. Due to the large number of instruments and their origin, almost all types of ensemble are possible.

But an ensemble is only realistic if you can divide the voices/notes for the individual instruments - this is exactly what Ensemblia does with its easy Voicing Engine. Each of the seven individual tracks can be distributed among your played notes.

A supplied intelligent arranger provides the appropriate pattern, all in the spirit of Steve Reich's or Michael Nyman's minimalism. Ensemblia is designed to create polyphonic arrangements, patterns and textures based on what notes you play and the voicing engine can be set individually for each instrument and for each step. Ensemblia doesn't play prefabricated phrases or MIDI files.

Cinematique Instruments say "We don't see Ensemblia 2 as an update – we like to call it evolution. Ensemblia 2 was mainly rebuilt from scratch – we have written a complete new script with new features but also have included some parts of the old scripts such as the voicing engine."

The design of the new 2.0 version now features a completely new interface, with the intention to make everything look noble and clear.

The Mixer now gives every separate instruments a wealth of sound shaping tools. A unique feature is the 3D Panning.

The Preset Browser comes with over 170 pre-assembled patterns which are easily selectable via a file browser.

Ensemblia 2 Orchestral comes with four separate units in one GUI. This lets you easily switch between four individual units with different patterns on the fly.

Both version require the full version of Kontakt 5.6.8 or higher.