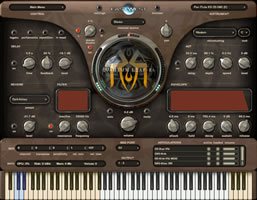 As the name suggests, Quantum Leap RA is now available with PLAY's intuitive custom interface with more control over the sounds offered in the collection along with the ability to load even more instruments than ever before.

In addition to PLAY's intuitive custom interface, Quantum Leap RA - PLAY Edition includes many other features, such as:

Quantum Leap RA - PLAY Edition provides composers with access to a variety of rare and unique instruments from Africa, Europe, India, the Americas and Australia, the Far East, and the Middle East and Turkish Empires. According to EastWest, Musicians will find that RA has an "amazing" sound quality and they'll "marvel" at the articulation of each instrument which has a wide range that goes from controlled to expressive. All of the instruments and ensembles featured in the collection were sampled extensively as a means of preserving the true character and expression of each instrument. For the first time with the Quantum Leap RA - PLAY Edition, users will have more control over the sounds offered in the collection along with the ability to load even more instruments than ever before.

"With ethnic instruments, the key to authenticity of sound is expression," says Quantum Leap Producer Nick Phoenix. "Now with the incorporation of our advanced PLAY sample engine, with its built-in sensing technology that monitors a player's style and adjusts the software and sounds accordingly, users will experience a level of detail that was lacking in other products in the market, making their projects come to life with range and emotion."

Find Ra in the KVR Marketplace