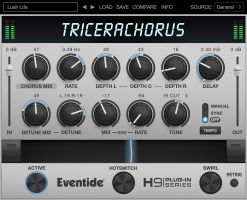 Eventide Audio's TriceraChorus effect, introduced in January for the Eventide H9 Harmonizer multi-effects pedal, has now also been released as a single plug-in for Windows, macOS and iOS.

Even better, TriceraChorus is available for an introductory price of $39 instead of $99 through November 10, 2020, at eventideaudio.com.

TriceraChorus is inspired by the classic tri-choruses and stompbox choruses of the 1970s and early 1980s. It pairs rich bucket brigade delay-style tri-chorusing with another classic effect of the 1980s: Eventide micro-pitch detuning, which can be used to thicken the sound, to add static chorusing, and to spread the stereo field by detuning the left and right signals in opposite directions. Combined, these tools can create syrupy, smooth, and deep modulations on anything from flat synths and strings to dry vocals, guitars, and more. The TriceraChorus effect was designed to inspire experimentation with a UI optimized for live performance.

Find TriceraChorus in the KVR Marketplace