Humanoid Sound Systems has updated Scanned Synth Pro to version 2.1.3, adding support for 64-bit VST/AU hosts. Existing users can get the update from the support page of the web site. 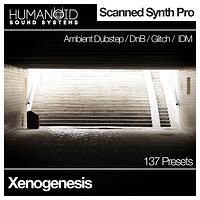 Humanoid Sound Systems has also released Xenogenesis, which contains 142 sounds for Scanned Synth Pro, created by Bryan Lee, who was on the sound design team for the 2.0 release.

The Xenogenesis soundset boosts the main two categories of sounds to remedy the fact that the factory set is currently woefully deficient in basses and leads – there are over 40 sounds in each of those categories as well as other sounds. Genres targeted: Ambient, Drum & Bass, Dubstep, Glitch, Grime, IDM, Industrial and Trip-Hop.