IK Multimedia has released a version 2.2 update for AmpliTube for iPhone, iPod touch and iPad. 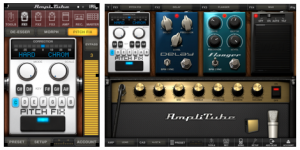 This free update adds the five vocal effects of IK’s VocaLive app which are now available for in-app purchase just like the popular gear models from AmpliTube Fender. With the new add-ons, AmpliTube for iPhone and iPad continue to evolve as a full-fledged mobile processing and recording studio apps for all music creation, composition and production needs.

The new vocal effects now available inside AmpliTube 2.2 include Choir (a 3-part harmonizer), Morph (a pitch and formant shifter), Pitch Fix (an automatic tuner for correction or production effects), Double (a voice doubler) and De-Esser.

AmpliTube 2.2 also adds the vocal canceller features (No Voice) from VocaLive to its SpeedTrainer interface – where you can slow down or speed up backing tracks without changing their pitch – that is included free in all versions of the AmpliTube mobile app. This not only removes the vocal from an existing track, it can also remove the guitar solo making Speed Trainer an even better tool for learning and rehearsing your favorite solos or vocal parts.

Additionally, AmpliTube 2.2 includes a newly enhanced preset system for managing all of your sounds. Presets are now organized in a folder-panel system to make storing, finding and recalling your library of sounds even easier. Dedicated “favorites” buttons with ten available banks store your 40 most used presets for instant recall. And when the entire AmpliTube Fender gear bundle or the entire VocaLive effects bundle are purchased, the new preset system will also show their related presets.

FREE and LE ($2.99/€2.39) versions of AmpliTube 2.2 are also available with a limited set of gear models included. Existing users can update their app for free via iTunes or their mobile device.