Krakli Software has released RMP2, a new multi-timbral synth consisting of two distinct sections: one using the hybrid FM/Physical Modelling techniques from Krakli's Richman series, the other section using the Multi-Oscillators from the S series synth. 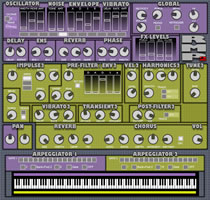 RMP2 comes complete with 384 patches contributed from Himalaya and Dimitri Schkoda. The vast number of presets mean that you can use RMP2 as a preset machine if you are daunted by its un-conventional controls - but it is also easy to create new and interesting sounds.

The bottom area of RMP2 allows for independent arpeggiation of each synth section and you can apply a fully variable key split enabling Chords and solo parts to be played at the same time.

Also included in the download package (to further encourage you to donate) is another plug-in: S3O. This is best described as a power-organ emulator, not especially designed to deliver Hammond Organ tones, S3O will also deliver thundering church organs and Cheesy transistor sounds. S3O is a reworking of a plug-in previously only available in Computer Music magazine. This version, however, is much expanded and has a much greater tonal range.

RMP2 is Donationware. It is available for Windows as a VST instrument plug-in.