Native Instruments has announced the new Traktor generation, which establishes the next level of power and ease-of-use with its Traktor Pro 2 software and Traktor Scratch Pro 2 digital vinyl system. Based on versatile new software features and a revised audio interface line, the new product generation gives DJs even more creative possibilities. 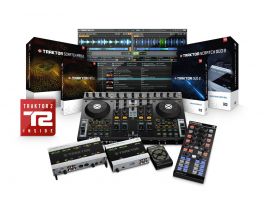 The new Traktor generation is based on a revised high-visibility GUI for intuitive operation under all conditions, and now offers up to four powerful Sample Decks as well as the unique Loop Recorder. While each Sample Deck can add up to four simultaneous samples or loops to the mix, the Loop Recorder allows DJs to capture audio from various sources on the fly and drop it back into the mix at any time, opening up creative techniques far beyond conventional DJing.

A further innovation of the new Traktor generation is the new "TruWave" technology. By displaying tracks and samples in all four decks with high-resolution multi-colored waveforms, it gives deep insight into the spectral properties of the music, visualizing both individual rhythmic elements as well as general sonic characteristics. With four selectable color schemes, an extra-wide zoom range and subpixel-accuracy waveform rendering, TruWave allows DJs to read their tracks visually for even more intuitive mixing.

The leading synchronization features in Traktor have been further expanded with a new "SoftSync" function that provides a unique combination of convenient automatic beat-matching and hands-on control. By keeping the tempo of multiple tracks in sync without manipulating the phase, SoftSync accommodates the widest possible range of mixing techniques both in Traktor Pro 2 and in Traktor Scratch Pro 2. The effect selection of Traktor has also been expanded with four additional types that offer unique ways to create dramatic breakdowns and other typical performance effects, including a tape delay emulation and the new "Bouncer", increasing the arsenal to an unparalleled assortment of over 30 algorithms.

The timecode-controlled Traktor Scratch Pro 2 combines the new software generation with the new Traktor Audio 10 interface, which offers additional I/O, improved signal chain monitoring and a versatile new bypass functionality over the previous Audio 8 model. With its true analog "Direct Thru" functionality that can be controlled directly from the Traktor 2 software, Traktor Audio 10 allows for easier switchovers between DJ sets and is ideally suited for club installation.

Most features of the new Traktor generation can also be found in the new Traktor Duo 2 versions, which offer a classic two-deck configuration with additional dual sample decks and a compact effect selection at an especially affordable price, with Traktor Scratch Duo 2 including the new Traktor Audio 6 interface.

All products within the new Traktor Pro 2 generation will be available in stores in April 2011.

Update and upgrade pricing is available on the NI website.

A video showcasing the new generation of Traktor Scratch systems is available on YouTube.

Another video showcasing the new generation of Traktor software is available on YouTube.