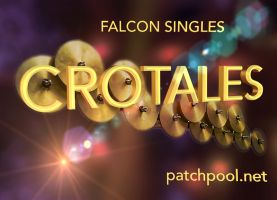 Patchpool has released Crotales, a virtual instrument expansion for UVI Falcon from the Falcon Singles-series.

Crotales are rare orchestral percussion instruments not often used in classical music - the instrument sampled for this library ranging from C5 – C7 (C3 – C5 in classical terms). Tuned chromatically its distinct and very bright bell-like sound cuts through even at low velocities. For this soundset the instrument was multi-sampled with 2 articulations, bowed (violin bow) and beaten (special mallets with a metallic tip). There are also tempo-synced loops, improvised textures and tremolos, these samples were then used as a starting point for producing tonal soundscapes, musical beds and more experimental sound textures, often involving Falcon's multi-granular oscillator and combining it with FM, pluck, wave-table and analog synth oscillators.

Up to 20+ Macros and switches are installed in each patch, some patches also use aftertouch, providing detailed and creative control over volume envelopes, filtering, amplitude- and pitch modulations, dynamics, stereo animation, layer leveling and more. All patches use some sort of background image in the UI, split patches have colored key-zones in the Falcon keyboard for easier navigation.

The included samples were mostly borrowed from Patchpool's sound libraries Aureus Ventus for HALion and Colliding Worlds for Groove Agent (distributed exclusively by Steinberg), users holding a license to Aureus Ventus can purchase Falcon Singles - Crotales at a 40% discount.

You can view/download the PDF for this library with more details, the licence agreement, and the patchlist including descriptions and playing tips here.