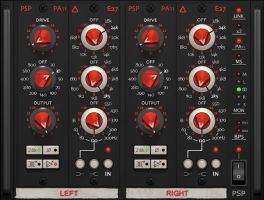 PSP is the sole developer and manufacturer of the PSP E27. Functionality and sound of the PSP e27 have been approved by Avedis Audio Electronics. PSP is responsible for all customer support.

Try the PSP E27 on your own material using fully featured 14 days demo version available on PSP's download page. To see the PSP E27 in action you can visit booth 6909 at the Winter NAMM show, or watch the short promo movie or 5' long video tutorial on PSP's YouTube channel.