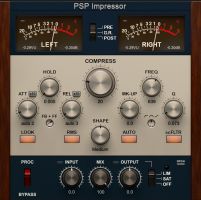 PSP Impressor, the successor to PSP MixPressor, emulates the magical classic characteristics of compressors with valve and opto-electronic circuits as well as classic modern compressors. PSP Impressor also features a highly configurable side-chain. The side-chain filter has a significant effect on PSP Impressor's sound and operation. Depending on your side-chain filter settings, the filter also lets you use the compressor as a de-esser or to reduce the pumping effects of heavy kick drums and the like.

Other Related News
When the going gets tough, the tough get going: An interview with PSPaudioware co-founder Mateusz Wozniak
17 Jun 2022Cherry Audio and PSP Audioware release 12 new modules for Voltage Modular
25 Jan 2019