PSP MixPressor by PSPaudioware is a Virtual Effect Audio Plugin for macOS and Windows. It functions as a VST Plugin, an Audio Units Plugin, an RTAS Plugin and an AAX Plugin. 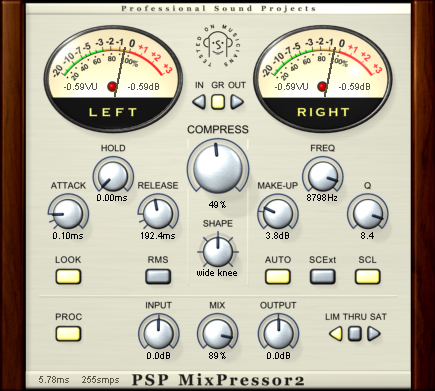 Part of PSP MixPack2 - a collection of six high-resolution, high quality audio processors designed to improve the quality of your digital audio tracks and mixes. These processors were not modeled on specific hardware analog processors, but rather on the sound and features of many analog circuits, with the goal of designing processors that can assist you in taming the sterility and harshness that often plagues digitally recorded audio. All plug-ins utilize 64-bit double precision floating point algorithms throughout their entire signal path and support sample rates of up to 192kHz.

New Loops September Sale: Up to 65% off sounds and presets