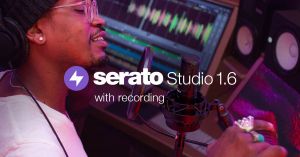 Serato has honed in on the Hip Hop music production market with the latest update of their Digital Audio Workstation (DAW), Serato Studio 1.6.

Designed to appeal to producers andā€”for the first timeā€”rappers and vocalists, Serato Studio empowers artists and music creators with the ability to record from any source and features a number of audio editing improvements.

Serato Studio 1.6 now allows producers and beat makers to record audio directly into the platform. The highly-requested feature speeds up production, eliminates the need for auxiliary recording applications, and creates a smoother workflow.

It further elevates Studio's professional-level capabilities by giving producers the ability to seamlessly record and edit vocals (rapping, singing, etc.), instruments, and any other external source, including samples from vinyl. This opens up new creative possibilities and, with the addition of built-in FX and seamless editing, helps users to produce more complex, unique songs ā€” faster.

As well as providing numerous advantages to experienced producers, the functionality broadens the appeal of Studio to a new group of artists ā€” vocalists. By taking advantage of Studio's intuitive UI, vocalists can use the beat maker as a sketchpad to record vocals before making a unique, professional-level backing beat in minutes ā€” a cumbersome task in most other DAWs. This empowers vocalists and opens new creative avenues.

Watch a range of tutorials covering the new recording functionality in Serato Studio:

How to record vocals

How to record instruments

How to sample from vinyl

In Serato Studio 1.6, Audio Track capabilities have been expanded to bring more power and functionality to the Song View. The user-requested ability to drag and drop clips into other tracks helps to speed up workflow, allows for better clip organisation, and makes editing even easier.

A further three FX slots (six total) have been added to the Audio Track, while the ability to add FX directly to an Audio Deck Pad has been removed, a small and necessary redesign.

Beat makers will also be delighted to see that they have also added the ability to keep adding pads, so they can build their tracks with the depth they desire.

Last year Studio introduced the option to 'Make Audio Available to other Applications', which used a third party virtual audio driver to live stream audio to a third party application. For Studio 1.6, Serato created their own Virtual Audio Driver for Mac which is easy to install in-app. This gives you more control, and more importantly works with Big Sur, unlike third-party drivers.

The Driver works like a virtual cable that an application or operating system can send audio through for another application to receive. In the case of Live Streaming this is Serato DJ Pro/Studio sending the audio out, and a third-party receiving the audio.