Sonic Cat and Luxonix have announced that all of Luxonix's Kontakt libraries have changed their brand to Sonic Cat, but Purity remains with Luxonix.

To celebrate this new brand, Sonic Cat has released a new freebie and is offering 40% off all products during this week.

40% off products (until this weekend):

Pop Piano Free is a free sample library for Kontakt of an acoustic grand piano. Pop Piano Free features a recorded Bechstein MP192 Grand Piano which is made in Germany, to differentiate between other libraries with analog equipment in good sound concert hall. 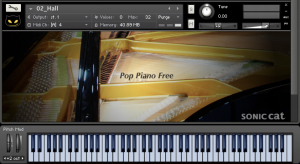