Sound Magic has announced the release of Ruby Piano3D, a new VST instrument plug-in for Windows. It costs €99. 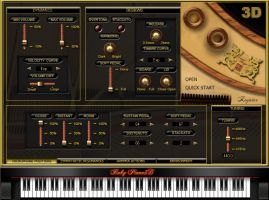 Physical modeling is at the heart of the Ruby Piano3D sound, but both sampling and synthesis are incorporated to add to the realism. This combination creates a sound as authentic as monster sample libraries but at a smaller size and a much smaller CPU demand.

Ruby Piano3D starts with the famous Yamaha sound, utilizing these powerful harmonics to create the authenticity and complexity that has long been a standard in concert halls around the world. Add complete 3D Audio Control to this Patented Hybrid Modeling Technology and the instrument becomes as versatile as it is realistic. Design your own piano from detailed physical parameters, such as hammer hardness and velocity, dynamic response, the interaction between different strings (sympathetic resonance), and even how much the soundboard reflects or absorbs sounds. Not a tweaker? Right out of the box, there are 8 pre-set modules to choose from.

Ruby Piano3D also allows you to arrange multiple virtual microphones around your virtual instrument. You can change microphone levels and choose from three different placements, mixing them together to shape that perfect sound. And there are no generic microphones here. You can choose from the best of the best as you select the sound of microphones such as the Neumann U87, M149, or the AKG C12VR.

Ruby Piano3D also incorporates 3D Audio which outputs to 7.1 channels with 24 Bit/192KHz resolution. The separate 3D Effect unit can place the piano into a real 3D space by utilizing the latest multi-HRTF technologies.