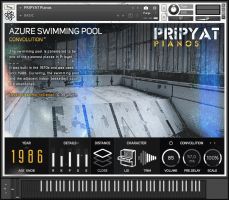 One of the important features of Pripyat Pianos is the impulse-responses collection for Convolution Reverb, recorded in well-known and not-so-known Pripyat sites, including the territory of the tragically known Chernobyl Nuclear Power Plant. A series of rooms and open spaces from Pripyat are at your disposal. Some presets are more invisible and will give a light shade to the sound of the instrument, and others will convey the scale of city structures or internal structures of the 5th power unit of the Chernobyl Nuclear Power Plant.

Age Knob – a slider that changes the instrument's behavior depending on the years of degradation from 1986 to 2019. The regulator allows you to hear almost untouched sound of notes from 1986. You can add special, lively notes, creating a unique sound with small age changes from 1986 and up, or a radical change installing 2019, which represents the current sound of the instruments at the moment. The sound of 1986 was created using the most suitable pianos and their keys.

Each of the 23 presets is supplemented with a photo of the place where the impulse-response was recorded, a brief description and the current level of gamma radiation in that particular location. Simply select the place you like from the drop-down list, touch the keys and feel the atmosphere of the Dead City. The main elements of control are the distance to the instrument, the ability to shorten the start of samples, adjusting the opening of the instrument lid, the convolution reverb control, as well as more detailed elements in the form of overtones, keystrokes, sustain pedal mechanism, dampers and the layer of sympathetic resonance, which was collected from 20 recorded pianos.

Kee Bass
Rated 5 out of 5 by JimboKeys
24th March