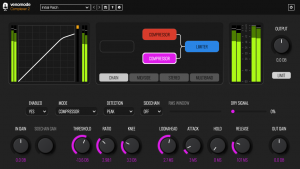 Each of the three stages can be processed in a variety of different configurations, including parallel chaining, stereo and mid/side, and multiband.

Each of the processors feature a vast amount of control. Along with the familiar attack, hold and release, each processor has an advanced lookahead section to capture peaks ahead of time.

There are also three detection modes: peak, RMS and average. Peak is ideal for limiting, and RMS allows smooth detection - great for compression.

Each processor can also be controlled via an external sidechain.

Price: £39. The update is free for existing Complexer users.

Find Complexer 2 in the KVR Marketplace