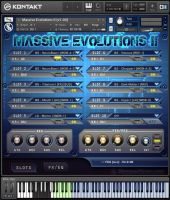 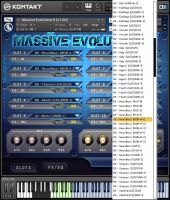 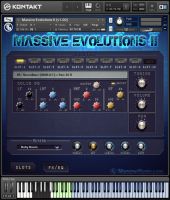 YummyBeats has released Massive Evolutions II for Kontakt - the Evolution Proceeds, which was specially designed for Electronic Music where "massive synth swappings and innovative, unique synths are required" - like Dubstep, Neuro Funk and any synth-based or modern cinematic production like TV commercials or video game music.

You can load up to 10 presets and sound variations from a large pool and switch between them with a few Key strokes - via dynamic key switches (green keys).

The basic sound pool contains lots of different Leads, Basses, Pads Arpeggios, FX with several sound variations of each synthesizer which let you "morph" the sounds individually during your performance. Massive Evolutions 2 works well for live performances and in studio productions, especially regarding Dubstep, NeuroFunk, NeuroHop and all synth-based productions where sound swappings or interesting, new and unique synths are important. Since the synths are also post-processed with lots of FX, most of the sounds can't be found in any regular synthesizer.

Massive Evolutions II is more than a sample based synthesizer, since it is quite as functional as usual synths. It uses several Envelope Generators, LFOs, Filters and it has a basic FX section. You can also assign custom MIDI controllers to each knob or button. Of course Kontakt still remains a sampler, but the extendible sound pool – and the controllable parameters via MIDI controllers give a sufficient synthesizer feeling.

Introductory Offer: Buy within the first week and get the first add-on* for free (as soon as it is released).