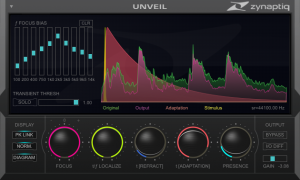 Zynaptiq has released version 1.6 of UNVEIL, their de-reverberation and signal-focusing plug-in.

This free update adds VST x64 support for Windows users, enables the Preview function for AudioSuite use of the AAX version, as well as several minor enhancements and fixes, and is available now.

The free v1.6 update is available from Zynaptiq now; users that have opted-in to receive email from Zynaptiq will be emailed the installer DL URL, users that didn't opt-in can contact Zynaptiq for download instructions.

Find UNVEIL in the KVR Marketplace