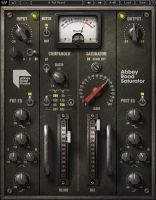 Musical analog saturation & distortion from the legendary Abbey Road Studios: The sound of classic tubes and transistors, driven hard from subtle to extreme, and excited by the ultra-rare EMI TG12321—a secret weapon of Abbey Road engineers.

Saturation is the heart and soul of analog recording and mixing—from the subtle soft clipping of a tube preamp, which adds warmth and pleasing harmonics to a drum or vocal part; to full-blown console distortion that makes a synth, bass or guitar part 'sing' in the mix.

But it doesn't end here. Abbey Road engineers were known to experiment endlessly with the wealth of original EMI gear at their disposal—pushing the equipment to its limits and reaching "happy accidents." Abbey Road Saturator captures the very happiest of such accidents.

The first generation of pop engineers at Abbey Road discovered that using the encode-only part of the process resulted in a beautiful high-frequency emphasis that added air and excitement and helped instruments cut through the mix: a secret weapon in the studio. Pioneering Abbey Road engineers, including Peter Bown and Geoff Emerick, were fans of using the TG12321 is this unusual way.

The plugin also gives you flexible control over the Compander's crossover frequencies, allowing it to focus in on different ranges depending on the source material: lower settings will be at home on bass and kick drums, higher values will afford unmistakable shine to vocals. The added phase knob causes the saturation to work in parallel, dramatically altering the personality of the distortion harmonics.

Abbey Road Saturator also sports unique M/S processing, letting the distortion apply either in stereo or to the mid or sides separately. Activate this beast on drums, drive the centered kick and snare into beefy levels, and leave the sides (overheads and cymbals) clean and sparkling.

From subtle harmonic enhancement that helps any instrument poke through a mix, to powerful distortion effects that strip an instrument of its original character and create an entirely new beast—Abbey Road Saturator is a singular twist on what we know saturation and distortion plugins to be.

Analog Saturation with a Twist: The Waves Abbey Road Saturator