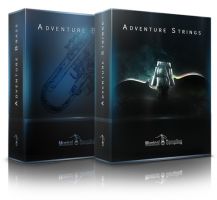 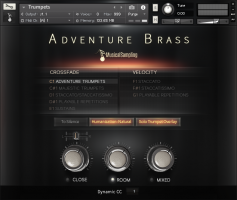 Arguably the strongest pairing in terms of versatility. Geared towards action and adventure scoring, both of these libraries feature a comprehensive set of patches specifically suited for exciting contexts.

With the Adventure patches in both Adventure Strings and Adventure Brass, the ability to quickly craft adventurous melodies in adventurous settings without any keyswitching is an adventure to behold.

Adventure Strings
Adventure Strings is the follow-up to our debut offering, Soaring Strings. Performed by the same number of players, recorded in the same room, seated in their traditional positions -- both share the same performance aesthetic. Strong, passionate and relentlessly energetic.

Adventure Brass
Adventure Brass was recorded at The Bridge in Los Angeles, a prominent scoring stage that has overseen a variety of television, film and game scoring projects since it's opening in 2010.

Starting out with LA's finest, the goal with this release was to create a true workhorse brass library that is first and foremost, fun to play.

We recorded medium-sized sections; a dual-purpose group designed to treat equally-well to both unison and harmonic passages with believable transparency, even when crossfading between dynamic layers: