My KVR
Synth (Sample Based) Plugin by Sonic Faction
$199
at sonicfaction.com
DetailsSwitch Section 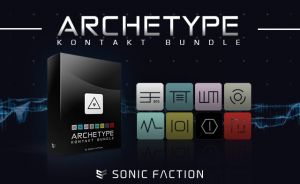 Archetype Kontakt Bundle by Sonic Faction is a Virtual Instrument Audio Plugin and a Standalone Application and Soundware (e.g. samples or presets that load into other products) for macOS and Windows. It includes, and is therefore "powered by", Kontakt Player, which functions as a VST Plugin, an Audio Units Plugin, an AAX Plugin and a Standalone Application.
The OS and Format icons below are for the latest version of Kontakt Player. The version numbers are for Archetype Kontakt Bundle.
Product
Version
1.0
System Requirements
Windows 7 or Higher
Product
Version
1.0
System Requirements
OS X 10.8 or Higher
Tags
Tags:Synth (Sample Based)AnalogArchetype Kontakt BundleDrum MachineKontakt InstrumentMelodic InstrumentsSequencerSonic FactionVintage
Instrument
Formats
Soundware
For
Native Instruments Kontakt
Copy Protection
Serial Number
My KVR - Groups, Versions, & More
8 KVR members have added Archetype Kontakt Bundle to 4 My KVR groups 9 times.
Not In Your MY KVR Groups
(or group limitation prevents versioning)
5 0 I Own This
2 0 I Want This
1 0 Favorites
+1 in private groups

Archetype is a collection of 8 legendary instruments, reborn for Kontakt.

This essential bundle includes some of the most sought-after synthesizers and drum machines in the world. Each instrument has been meticulously sampled from the original hardware and redesigned with a fresh new look.

With over 800 presets included, Archetype is capable of a vast range of musical styles. All 8 instruments sound vibrant and incredibly fat; allowing for producers, composers and sound designers to have an analog arsenal at their fingertips wherever they go.

Each instrument's unique interface is designed with a modern twist and has reactive animations that will inspire your creativity. Along with a ton of tweakable controls, every instrument also includes a built-in 8x8 grid step sequencer for creating patterns on the fly.

Experience Kontakt in a whole new way with Archetype.