Armadillo - Virtual Charango by ClioStudios is a Virtual Instrument Audio Plugin. It functions as a VST Plugin. 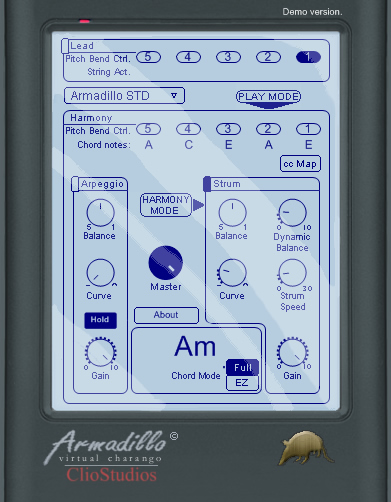 Armadillo - Virtual Charango is a virtual instrument based on a South American instrument called "Charango".

The origin of the instrument dates back to the time when South American lands were colonies of European kingdoms. Back then, the natives quickly learnt how to play and build the musical instruments the Europeans had brought, and soon they were building their own versions of those instruments. Some researchers have found evidence of charangos being used during the XVII century, but no-one has ever been able to give a definitive answer to the question of when or where was that instrument created.

Today, it is possible to find charangos being used in Perú, Chile, Bolivia and Argentina, with many different sizes, number of strings and tunings available.

Armadillo - Virtual Charango employs a modern string-to-keyboard implementation that allows articulations such as "strums" to be achievable using a standard keyboard controller. This feature, combined with an intelligent chord recognition system which finds out what chord you are playing and translates it into a chord voiced specifically for a charango, makes this virtual instrument the perfect tool for those in need of a traditional South-American sound with all of the advantages associated with using a DAW for composing.