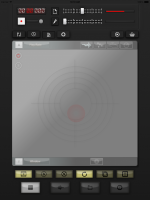 ASlicer by DNBAPP is a Mobile Audio App and a Standalone Application for iOS. It functions as a Standalone Application.
Product
Version
1.4
System Requirements
iPad 2, iOS 6.1 and above
Tags
Tags:Sample SlicerASlicerDNBAPPGranular SynthesisSequencer
Sample Formats
Loads and/or Saves
AIFF, WAV 16-Bit
Copy Protection
None
My KVR - Groups, Versions, & More
9 KVR members have added ASlicer to 3 My KVR groups 9 times.
Not In Your MY KVR Groups
(or group limitation prevents versioning)
6 0 Favorites
2 0 I Want This
+1 in private groups

The app records to a sound buffer through the internal microphone (or via Audiobus), from an audio file or both simultaneously. During the recording process the application detects hit points, which after the recording process has completed it uses to assign a series of slices to each of the apps 16 Tiles. Slice assignment can be changed manually afterwards if so desired. Each of the sixteen tiles is a playback machine in its own right with it's own set of assignable playback parameters and Fx settings, which can be mixed and adjusted within each of the Tiles "Pad" mode. Patterns of tiles can be recorded and played back using the tile sequencer panel.